What problem does the neural network really solve?

In the image below taken from a Youtube video, the author explains that the neural network can be used to fit a relational graph for a set of data points shown by the green line. And that this is accomplished by using weights, biases and activation functions.

My slight confusion is that, initially, the weights and biases and randomized, and they are re-adjusted by backpropagation. This means that, at the end of the output layer, we must have the actual values of the target function anyway.

So what problem does the neural network really solve?

So, for example, we want to find the target function for dosage and efficacy, we are given the data points shown in blue. If we initially choose randomized values for the weights, biases and activation function, then, at the output layer, we determine an output value for efficacy, but there is no way to know whether this value is in fact correct or not. So, we need the actual values to determine the difference.

What about when we choose a value of dosage which has not been observed, for example, 0.25? Doesn't this rely upon a best-fit relation graph that has already been fitted to the data prior to adjusting the neural network? 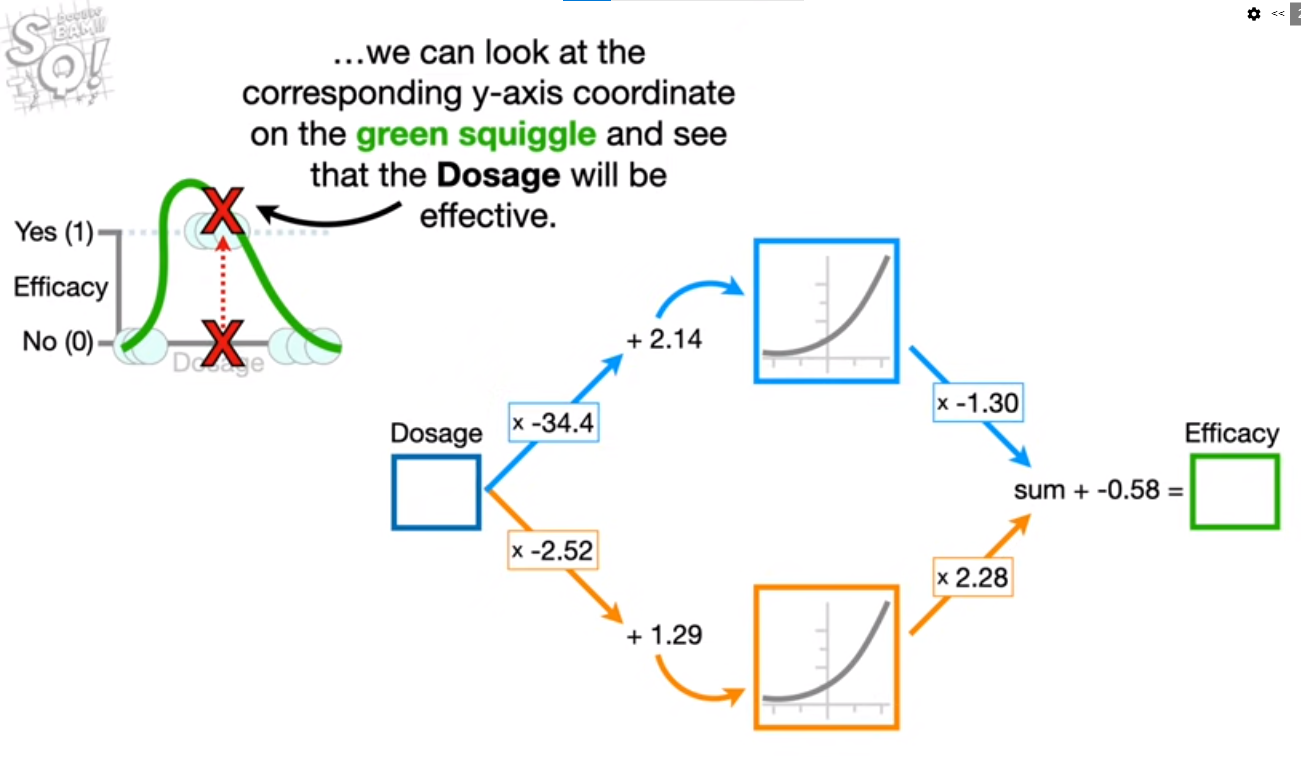 This means that, at the end of the output layer, we must have the actual values of the target function anyway.

Yes, this is necessary for supervised learning. You will often see this called a labelled dataset, where the "label" is an output value that you know is associated with each input. A set of labels associated with some inputs, that you have collected for training may also the called the "ground truth".

We do not need all possible values though, but enough examples that the neural network can interpolate between them. How many examples that is depends on the complexity of the function we want to learn.

So what problem does the neural network really solve?

There are three main things it solves, and these are shared with most other machine learning approaches:

These traits are all useful when you do not have a strong sense of what the correct function should be, in terms of writing an equation, but do have many examples of it.

What about when we choose a value of dosage which has not been observed, for example, 0.25?

The neural network will still produce an output. In a very simple scenario, where you had trained with example inputs at e.g. 0.2 and 0.3, then the output will likely be somewhere between the outputs for those two values. For a neural network, this in-between value can be much more sophisticated than a simple mean of the nearest examples. ML that uses the nearest values exists, that is called k-nearest neighbours.

If this process has worked well, and the trained neural network produces useful, accurate predictions from unseen inputs, it is said to generalise well. Very often, that is the goal for training a neural network or other machine learning system.

It is worth mentioning some additional facts and features of training neural networks (and ML in general):

Exceptions to all of these points exist. They are the norm, but it will depend on the details of what you are trying to do.

Not the answer you're looking for? Browse other questions tagged neural-networks training supervised-learning labeled-datasets or ask your own question.