Why does the number of input tokens to an LSTM have an impact on the convergence of Integrated Gradients?

I am computing the attribution scores for a simple LSTM model using Integrated Gradients. This method defines the contribution of a feature to a model prediction by integrating over the gradients along a path between the input and a fixed baseline:

A common way of measuring the quality of the generated attributions is via the completeness axiom, which states that:

The key to computing the IG scores is the approximation of the path integral, which can be approximated via Riemann sum, or a similar interpolation method. In section 5 of the IG paper, it is stated that, in practice, between 50 to 300 interpolation steps are sufficient to obtain IG scores that converge to satisfy the completeness axiom.

I am now testing the IG attributions on a simple LSTM model (1-layer, 16 hidden units). For shorter inputs (<20 tokens), convergence is reached in a reasonable number of steps, and the approximation of the integral is stable. However, when the length of the input increases, I find that the integral approximation diverges when the number of interpolation steps is increased! This can be seen in the following plot (N.B. the y axis is logarithmic): 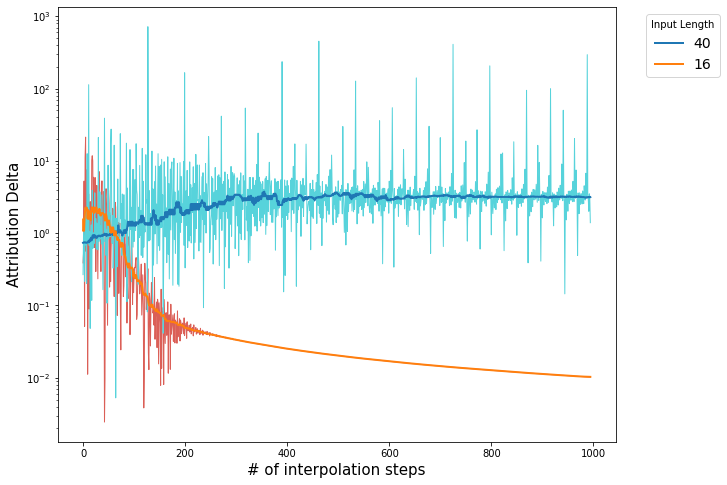 My question is: why does the number of input tokens to the LSTM have an impact on the convergence of integrated gradients?

It is stated in footnote 1 of the IG paper that the completeness axiom depends on whether the model satisfies Lebesgue's integrability condition. It would surprise me, however, that increasing the number of input tokens would dissatisfy this constraint: would it be possible that the model has become too nonlinear for numerical integration to still work? If so, are there alternative numerical integration methods that could be used here, instead of Riemann approximations or the Gauss-Legendre quadrature?

1
Does changing the order of the convolution layers in a CNN have any impact?
2
Why does an LSTM cycle on initialisation?
3
Why does the error of my LSTM not decrease after 10 epochs?
2
Why should the baseline's prediction be near zero, according to the Integrated Gradients paper?
1
Is there a full and precise formulation of Theorem 1 in the Integrated Gradients paper?
0
Is my approach to building an RNN to predict the probability that the word is in English appropriate?
5
Does the policy iteration convergence hold for finite-horizon MDP?
0
Why don't integrated gradients explain samples correctly?