Why is there a 1 in complexity formula of uniform-cost search?

I am reading the book titled Artificial Intelligence: A Modern Approach 4th ed by Stuart Russell and Peter Norvig. According to the book, the complexity of uniform-cost search is as $$ O(b^{1+\lfloor{C^*/\epsilon}\rfloor}), $$

where $b$ is the branching factor (i.e. the number of available actions in each state), $C^*$ is the cost of the optimal solution, and $\epsilon > 0$ is a lower bound of the cost of each action.

My question is: Why is there is a 1 in the formula? 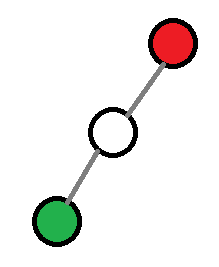 PS. I know there is a similar question in stackoverflow and have read the answer. But there is a disagreement between the answers about the 1.

To be fair I struggle too, to see a reason for it to be included.

Now, to need that $+1$ correction factor it should be possible that

But you can divide both members by N and multiply by $min\{c_1,\dots,c_N\}$ obtaining that

On the left hand side you have the average of the costs, which of course can't be smaller than the minimum of the costs, therefore that has no solution. This means that even without the +1 factor you can't underestimate the length of the path to the optimal solution using $\lfloor C^\star/\epsilon\rfloor$.

On the flip coin by the way when you compute that $\lfloor C^\star/\epsilon\rfloor$ you're actually trying to find an upper bound for the length of the optimal path, so if you add +1 (equivalent to compute the ceiling instead of floor) you still get an upper bound. Also, since you're computing an $O(\circ)$ keep in mind that if a function is an $O(b^k)$ then it's an $O(b^{k+c})$ for every $c>0$ so although not necessary the book isn't technically wrong.

EDIT: Take all I said with a grain of salt, I'm a student, too and still have to take the AI exam

EDIT 2: I thought that another possible reason why you would expand (at most) b more nodes after reaching the depth of the optimal goal is that you perform the goal test the moment you extract the node from the frontier and not before insertion. This is necessary cause it grants us that when we extract a node from the frontier we reached it through the path with lowest cost from the initial state, but it will cause us to expand at most one more level before realizing a node in the frontier is indeed a goal.

Not the answer you're looking for? Browse other questions tagged time-complexity norvig-russell uniform-cost-search or ask your own question.

1
Which "assumptions" made about the state space are Russell and Norvig referring to in their book?
5
How does the uniform-cost search algorithm work?
5
What are the differences between uniform-cost search and greedy best-first search?
5
When is a knowledge base consistent?
3
A* and uniform-cost search are apparently incomplete
2
Understanding the pseudocode of uniform-cost search from the book "Artificial Intelligence: A Modern Approach"
3
Why is the completeness of UCS guaranteed only if the cost of every step exceeds some small positive constant?
3
How DFS may expand the same state many times via different paths in an acyclic state space?