Order of operations on sparse recurrent network alters the output. How to deal with it?

I'm working on an implementation of NEAT, which evolves neural networks with small and sparse topologies.

Evaluating a sparse and possibly recurrent network requires a different approach than the matrix operations of dense networks, and I'm trying to wrap my head around the order in which nodes should be evaluated.

I've set up a simple example: 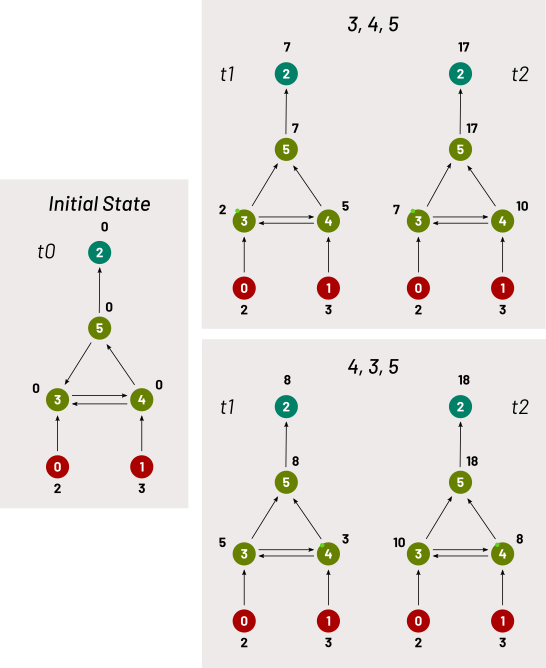 Assuming that the algorithm has the same intuition we humans do: evaluate the nodes connected to the input, then the "aggregation" node, then the output. How should it decide whether to evaluate node [3] before node [4] or vice-versa?

The side-effect of this behavior appears when comparing two networks. Say you have the network above, and a copy of it where [3] and [4] are inverted. I feel like both should return the same result for the same input in order for evolution to work properly.

I believe NEAT just loops through the nodes in the order they appear in a list.

Looking at the source (.cpp) and removing time features it looks like this in JS:

On initialization the outer while loop might run >1 times. After this it will only run once on every time step.

From my understanding, on each time step NEAT does not "push each input value fully from input to output", only "pushes from one node to the next" except at intialization.

Not the answer you're looking for? Browse other questions tagged recurrent-neural-networks neat neuroevolution .

5
What happens if 2 genes have the same connection but a different innovation number?
3
How does adjusted fitness penalize large species in NEAT?
7
How to evaluate a NEAT neural network?
2
Do I have to crossover my node genes in NEAT, and how?
1
Different ways to produce the same network in NEAT