Is the phrase "Feature Pyramid Network" refer to CNN only?

"Feature Pyramid Network" is a network that is used for feature extraction. Since it is pyramid in shape, it might be called so.

A Feature Pyramid Network, or FPN, is a feature extractor that takes a single-scale image of an arbitrary size as input, and outputs proportionally sized feature maps at multiple levels, in a fully convolutional fashion. This process is independent of the backbone convolutional architectures. It, therefore, acts as a generic solution for building feature pyramids inside deep convolutional networks to be used in tasks like object detection.

FPN composes of a bottom-up and a top-down pathway. The bottom-up pathway is the usual convolutional network for feature extraction. As we go up, the spatial resolution decreases. With more high-level structures detected, the semantic value for each layer increases.

Am I true? Can I use the phrase for any arbitrary ANN that is pyramid in shape or is it an exclusive term of CNNs in computer vision only?

No, Feature Pyramid Networks does not only refer to CNNs.

Take the recently trending "Swin Transformer" as an example. 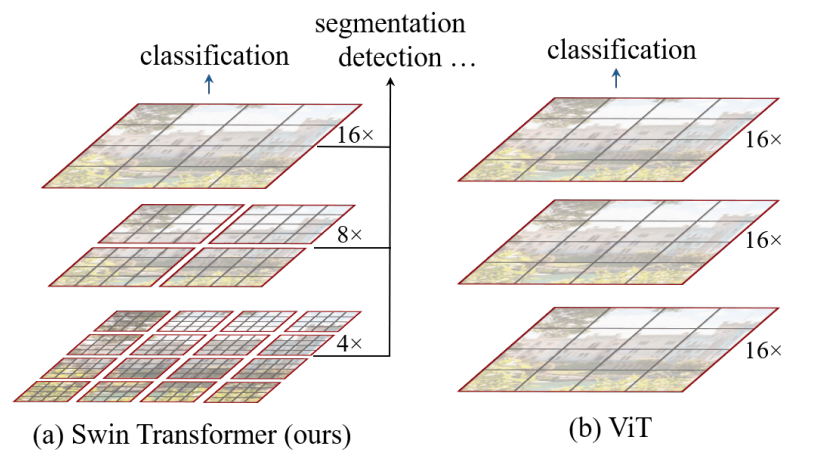 Swin Transformer is a variant of vision transformers, and they do not employ convolutional layers. However, their design allows them to output feature maps in multiple scales (feature pyramids). The authors actually used the feature pyramids for image segmentation tasks using UperNet.

5
Can translational invariance of CNNs be unwanted if object is likely in certain positions?
4
When training a CNN, what are the hyperparameters to tune first?
1
Can fully connected layers be used for feature detection?
3
Is continuous learning possible with a deep convolutional neural network, without changing its topology?
0
How is a ResNet-50 used for deep feature extraction?
2
Is it true that channels always represent colours of an image?