First, in the following context: 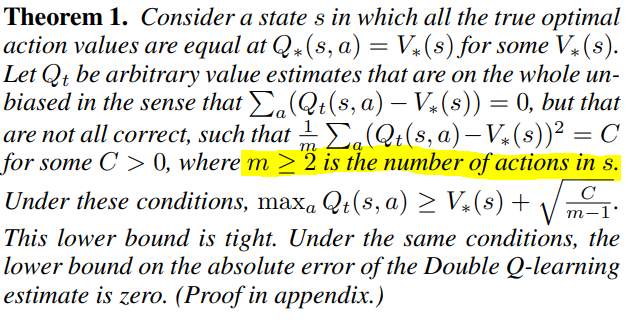 I have a hard time understanding the way the phrase is being used or if it is being used in the same way, could anyone care to explain how it is meant to be understood?

The expression "number of actions" is being used in the same way in both cases. In fact, the letter $m$ is used in both cases. The number of actions (in the state $s$) is the number of possible actions that you can take in the state $s$. So, here, $m$ does not refer to the dimensionality of an action, but to the size of the action set for a state. So, if $A(s)$ is the set of actions that you can take in $s$, then $m = |A(s)|$. The paper that they refer to in the first excerpt actually uses (on page 3, in the lemma) $n$ to refer to $m$ and states that $n$ is the number of actions. Here there's a related question, which you may want to read.

Not the answer you're looking for? Browse other questions tagged deep-learning papers dqn double-dqn double-q-learning .

5
What is a high dimensional state in reinforcement learning?

15
How to deal with a huge action space, where, at every step, there is a variable number of legal actions?
2
How does the target network in double DQNs find the maximum Q value for each action?
1
How does back-propagation through time work for optimizing the weights of a bidirectional RNN?
4
Why does regular Q-learning (and DQN) overestimate the Q values?
0
How is a ResNet-50 used for deep feature extraction?
4
How to approach a blackjack-like card game with the possibility of cards being counted?