When exactly does the split into different heads in Multi-Head-Attention occur?

I am confused by the Multi-Head part of the Multi-Head-Attention used in Transformers. My question concerns the implementations in Pytorch of nn.MultiheadAttention and its forward method multi_head_attention_forward and whether these are actually identical to the paper. Unfortunately, I have been unable to follow along the original code of the paper. So I could not check whether the implementations in Pytorch are acutally identical to the paper.

Please forgive the excessive use of illustrations. However, I hope it will improve understanding my problem.

What is the correct order for calculating the Queries Q, Keys K and Values V and splitting the operation into the individual Attention-Heads? Unfortunately most explanations I found online while helpful for understanding the general principle and intuition of Multi-Head-Attention did not go into the details of the implementation.

In the original paper Attention is all you need Multi-Head-Attention is explained as followed: 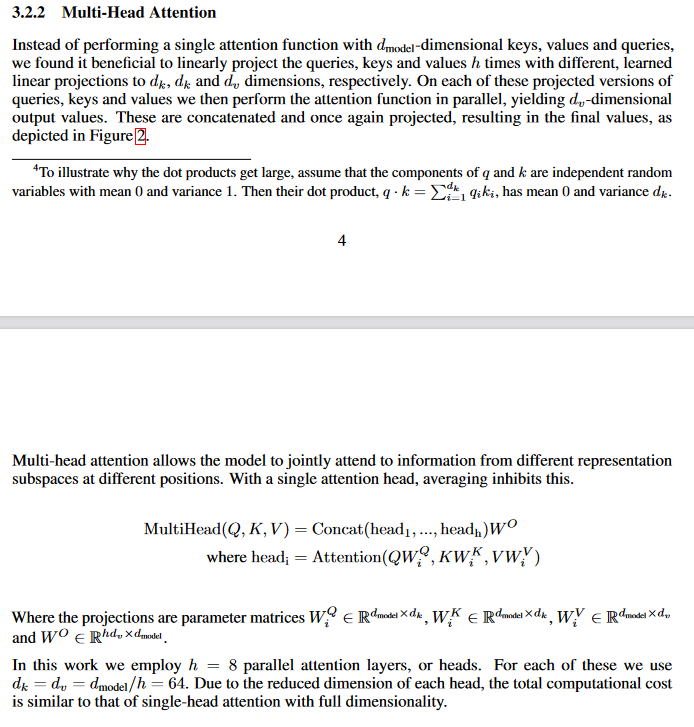 In the text they say "project the queries, keys and values h times with different, learned linear projections to $d_k,d_k$ and $d_v$ dimensions and since they set $d_k=d_v=d_{model}/h=512/8=64$. Therefore, if we actually have single matrices for every Attention-Head h we would have 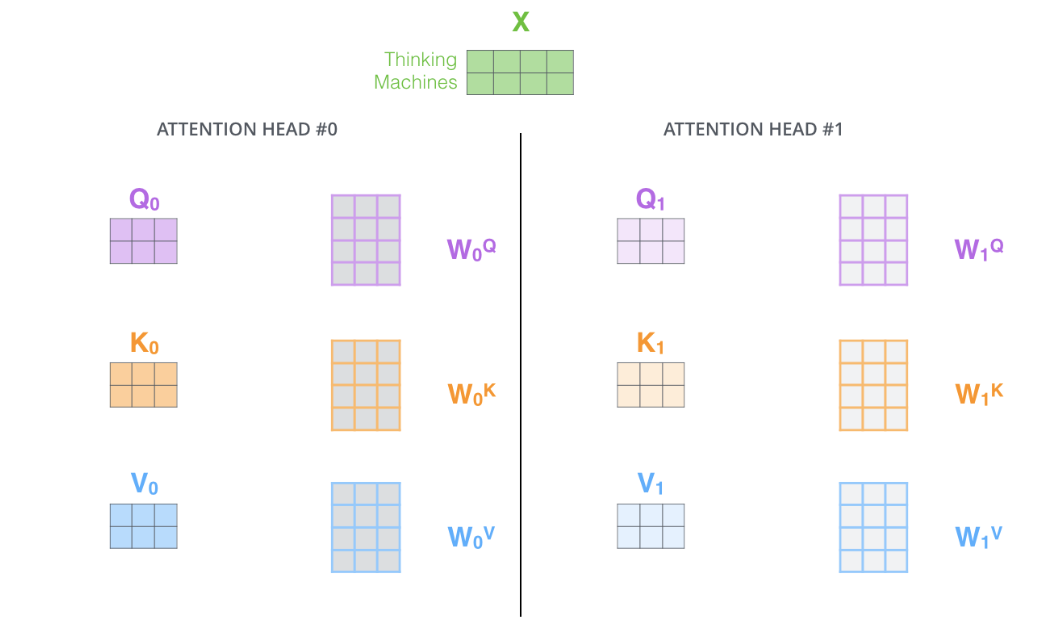 It is explained that the input X is transformed into the Queries, Keys and Values for the different attention heads by using different projection matrices which are learned during training.

This seems to indicate that the split into the individual Attention-Heads is conducted after the calculation of $Q,K,V$ (or rather during the calculation). Since we have $h=8$ this leads in sum to $3*8*512*64=3*512*512$ learnable parameters in total (if we ignore the bias). Thus as far as the overall number of parameters is concerned we would have the same number if we would instead use three big matrices which concatenate the matrices of the individual Attention-Heads.

In the explanation from the same author of GPT-2 (this model has an embedding dimension of 768 and 12 Attention-Heads, instead of 512 and 8 like the original Transformer) found here https://jalammar.github.io/illustrated-gpt2/#part-2-illustrated-self-attention 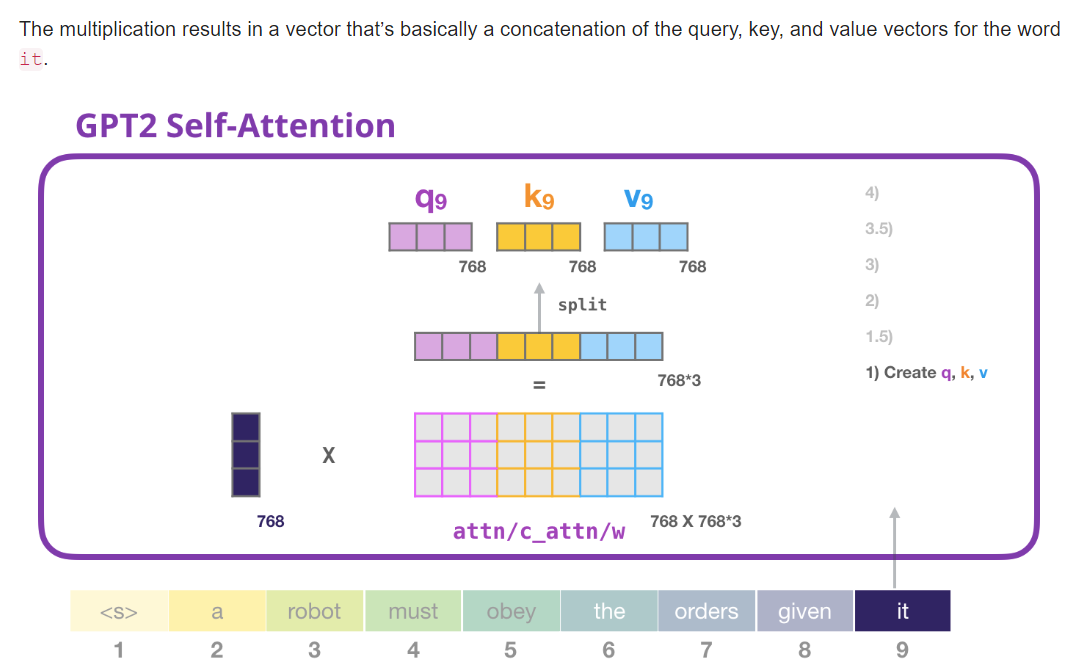 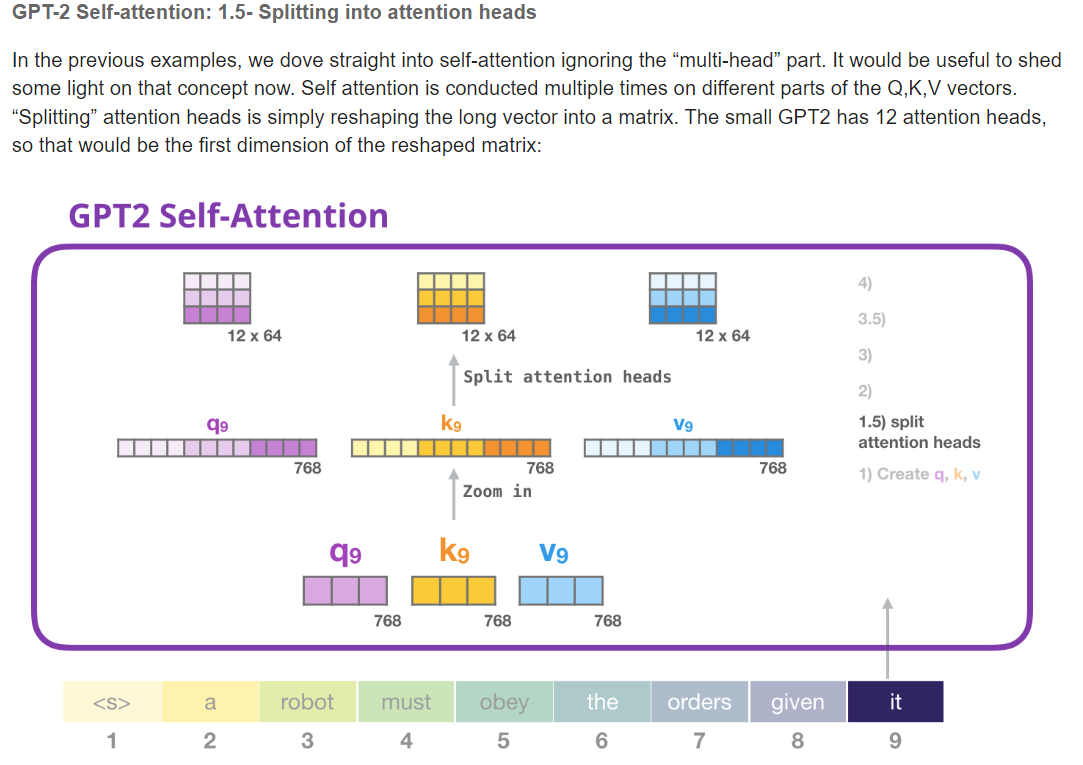 the Queries Q, Keys K and Values V are first calculated by multiplying the input with one big matrix which is the concatenation of $W^Q,W^K,W^V$. If the input for calculating Q, K and V is identical (which is the case for self-attention), it is clear to me that you can use $W_{concat}=[W^Q,W^K,W^V]$ and obtain $[Q,K,V]$, since you essentially still multiply the input with each weight matrix separately.

So overall here we did not use individual matrices per Attention-Head but only one larger matrix.

Is this method mathematically identical to the one using individual smaller matrices per Attention-Head?

It appears that this is the way the calculation is implented in Pytorch, if $d_{model}=kdim=vdim$ Though here unlike in the paper which used $d_k$ and $d_v$ as names, $kdim$ and $vdim$ refer to the dimension of all Attention-Heads summed up, e.g. $kdim=d_k*num_{heads}$(=512 for the original Transformer).

So In the documentation of nn.modules.MultiheadAttention the model either creates three separate projection matrices to generate the Queries, Keys and Values or one big matrix (if the dimensions are identical). The following is part of the _init_ function.

If we stay in the standard case of _qkv_same_embed_dim=True the input is passed through a nn.linear as part of _in_projection_packed which is using self.in_proj_weight as the weight

Then later the Queries, Keys and Values are split up into the individual Attention-Heads:

Therefore, it appears to me that both ways of calculations should be equal and the one using the bigger matrices is just more efficient to compute. Is this correct?

In this case, I ask myself why nn.MultiheadAttention requires that embed_dim is divisible by num_heads, since the split into the individual Attention-Heads is actually conducted after generating $Q,K,V$. Should then not $d_q,d_k,d_v$ be made to be divisible by num_heads? Since these dimensions do not have to be equal to the dimension of the inputs?

Thanks for any advice in advance!

The queries, keys and values are calculated then chunked so that each chunk depends on (is a linear combination of) all values of the input embedding.

As for understanding an implementation, I didn't bother with pytorch but instead understood this code http://einops.rocks/pytorch-examples.html although there are differences as I understand that pytorch expects input in the form (L, N, C) where L=words, N=batch, C=embedding for performance reasons.