To what extent can quantum computers help to develop Artificial Intelligence?

What aspects of quantum computers, if any, can help to further develop Artificial Intelligence?

Quantum computers are super awesome at matrix multiplication, with some limitations. Quantum superposition allows each bit to be in a lot more states than just zero or one, and quantum gates can fiddle those bits in many different ways. Because of that, a quantum computer can process a lot of information at once for certain applications.

One of those applications is the Fourier transform, which is useful in a lot of problems, like signal analysis and array processing. There's also Grover's quantum search algorithm, which finds the single value for which a given function returns something different. If an AI problem can be expressed in a mathematical form amenable to quantum computing, it can receive great speedups. Sufficient speedups could transform an AI idea from "theoretically interesting but insanely slow" to "quite practical once we get a good handle on quantum computing."

Until we can make a quantum computer with a lot more qubits, the potential to further develop AI will remain just that.

D-Wave (which has just made a 2,000+ qubit system around 2015) is an adiabatic quantum computer, not a general-purpose quantum computer. It is restricted to certain optimization problems (at which its effectiveness has reportedly been doubted by one of the originators of the theory on which it is based).

Suppose that we could build a 32 qubit general-purpose quantum computer (twice as big as current models, as far as I'm aware). This would still mean that only 232 possibilities exist in superposition. This is a space small enough to be explored exhaustively for many problems. Hence, there are perhaps not so many problems for which any of the known quantum algorithms (e.g. Shor, Grover) would be useful for that number of bits.

Quantum computers can help further develop A.I. algorithms and solve the problems to the extent of our creativity and ability to define the problem. For example breaking cryptography can take seconds, where it can takes thousands of years for standard computers. The same with artificial intelligence, it can predict all the combinations for the given problem defined by algorithm. This is due to superposition of multiple states of quantum bits.

Currently, quantum computers are still in the early stages of development and can perform complex calculation. There are already technologies like D-Wave systems which are used by Google and NASA for complex data analysis, using Multi-Qubit type quantum computers for solving NSE fluid dynamics problems of interest or global surveillance for military purposes, and many more which we're not aware.

Currently there are only a few quantum computers available to the public, like IBM Quantum Experience (the world’s first quantum computing platform delivered via the IBM Cloud), but it's programming on quantum logic gates levels, so we're many years behind creating artificial intelligence available to public. There are some quantum computing languages such as QCL, Q or Quipper, but I'm not aware any libraries which can provide artificial intelligence frameworks. It doesn't mean it's not there, and I'm sure huge companies and governments organisations are using it for their agenda to outcome the competition (like financial market analysis, etc.).

Direct Answer to Your Question:--

The field where quantum computing and A.I. intersect is called quantum machine learning.

Now combine (1) and (2), and you end up with even more uncertainty; the technical details shall be explored in this answer.

IBM is an authority:--

IBM: Quantum Computers Could Be Useful, But We Don't Know Exactly How

This particular section on the implementations is worth noting:--

" ... This dependence on data is a powerful training tool. But it comes with potential pitfalls. If machines are trained to find and exploit patterns in data then, in certain instances, they only perpetuate the race, gender or class prejudices specific to current human intelligence.

But the data-processing facility inherent to machine learning also has the potential to generate applications that can improve human lives. 'Intelligent' machines could help scientists to more efficiently detect cancer or better understand mental health.

Most of the progress in machine learning so far has been classical: the techniques that machines use to learn follow the laws of classical physics. The data they learn from has a classical form. The machines on which the algorithms run are also classical.

We work in the emerging field of quantum machine learning, which is exploring whether the branch of physics called quantum mechanics might improve machine learning. Quantum mechanics is different to classical physics on a fundamental level: it deals in probabilities and makes a principle out of uncertainty. Quantum mechanics also expands physics to include interesting phenomena which cannot be explained using classical intuition. ... " — "Explainer: What Is Quantum Machine Learning And How Can It Help Us?". Techxplore.Com, 2019, https://techxplore.com/news/2019-04-quantum-machine.html.

I would say that the answer to your question, is yes. I could write a short book on the subject (that might be a good idea actually) but I will keep this response brief, although I am happy to answer any further questions you may have to which I possess the answers in the comments!

The primary reasons that I believe the newly blossoming field of Quantum Information will have a massive impact on the field of Machine Learning in general, are as follows:

The most simple reason for my belief is that the primary goal of Machine Learning is to create an entity that is capable of coherent, self-aware thought much like we exhibit as human beings. We know that the brain is what allows us to be capable of such feats, and thus I view the field as something like brain counterfeiting. Without going into esoteric detail, there are many subtleties of the brain's workings that are thought to be quantum mechanical in operation, and thus would suggest that the path of least resistance to replicating the system would require a quantum mechanical computational medium.

The second primary rationale which solidifies my position is the efficiency gained when mapping linear operations into a qubit-based formalism. Which is primarily due to the quantum phenomena referred to as Super Position, which allows for a multiple qubit gate to not only work with the options of 00, 01, 10, and 11 (assuming a two-qubit gate); but to also work with any combination in-between, during the computation.

This illustrates the concept of a Bloch Sphere representation in a more concrete manner. 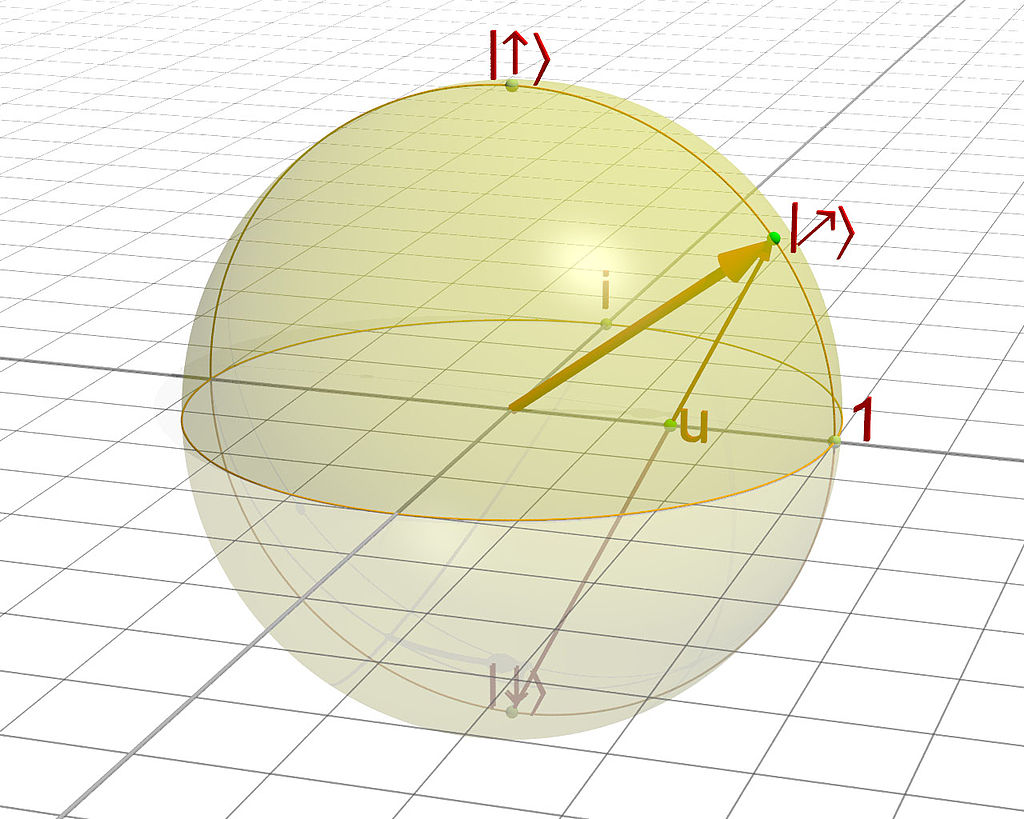 Although when the result is obtained (this is what is referred to as collapsing the wave function) you will only still have a resulting state space with 2^n possibilities, where n is the number of qubits. This being said, there are very clever ways, by which one can design their algorithms to make full use of this technically infinite computational space before observing the final results.

I hope that my answer is helpful to you in some way, although I am aware that it is not a very in-depth answer, I feel that it hits the primary reason why my personal belief is that there will be a wall which is hit, in the pursuit of a general AI, while we are limited to classical computation faculties; and thus will require quantum-based computation before we are able to truly mimic the brain's most well-kept secrets! The next couple of decades should be VERY interesting in the fields, keep a close eye on the latest happenings!

Not the answer you're looking for? Browse other questions tagged quantum-computing .

8
Does this argument refuting the existence of superintelligence work?
3
Are there any novel quantum machine learning algorithms that are fundamentally different from "classical" ones?