Why are SVMs / Softmax classifiers considered linear while neural networks are non-linear?

My understanding is that neural networks are definitely not linear classifiers, as the point of functions like ReLU is to introduce non-linearity.

However, here's where my understanding starts to break down. A classifier, like Softmax or SVM is considered to be a "linear classifier". I'm using the definitions from CS 231N. There may be another definition of an SVM, but I'm not considering that.

In a linear classifier we have the following: $W \cdot x$ where

The output is a vector of scores. 1 score per label.

An SVM classifier uses hinge loss to update the weights:

A softmax classifier normalizes the output values using the softmax function and then uses cross-entropy loss to update the weights:

From the lecture CS231n Winter 2016: Lecture 2: Data-driven approach, kNN, Linear Classification 1, we have the following image to help visualize what a linear classifier does:

However, this doesn't seem to be that much different from ReLU (Taken from this post: https://stats.stackexchange.com/questions/158549/why-are-activation-functions-needed-in-neural-networks): 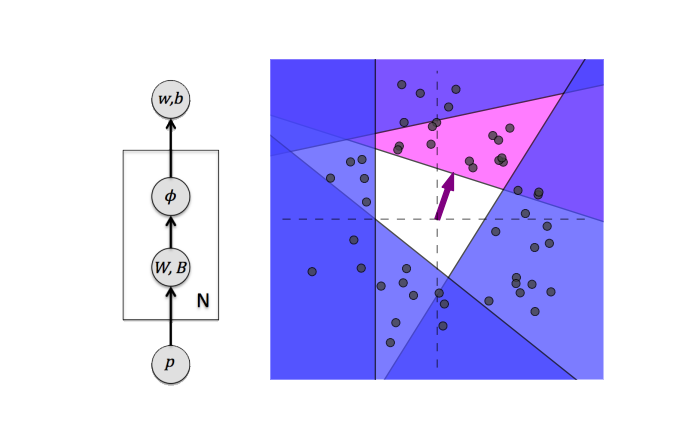 I was confused because the images look similar even though in reality the problems the 2 images are solving are completely different:

The SVM cannot extract individual features, it has to smush them all into a single line in $D$ dimensional space (where $D$ is the number of pixels). That line can be represented as:

On the other hand. A multi-layer neural network, for example:

Can now partition the space into a 100 different ways. The example is a bit convoluted, since the neural net is classifying 1 thing into several buckets instead of doing binary classification, but the principle is the same. Maybe 10 out of a 100 neurons in the second layer are dedicated to partitioning the space of images with regard to cars.

FoobarFoobar
12144 bronze badges
New contributor
Foobar is a new contributor to this site. Take care in asking for clarification, commenting, and answering. Check out our Code of Conduct.
$\endgroup$
Add a comment  |

Not the answer you're looking for? Browse other questions tagged neural-networks machine-learning activation-functions support-vector-machine softmax .