Markov Model for a Traffic Intersection

I need some help in developing a Markov Model for a crossroads there is no one way road and i am assuming at this time that traffic is only allowed to go straight no turns are allowed. There are 4 roads and 4 signals(agents).

Why not use a single agent to control the intersection with the following rules:

Given the above, we have the following valid moves, which are both State Space and Action Space : 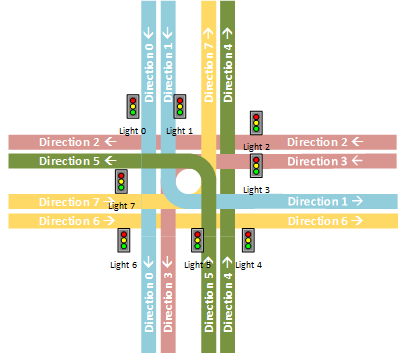 Final component to complete the moel, is the reward signal, which can be simply the negative sum of time spent per car in the intersection

a single agent, will be able to optimize the solution to avoid punishment (negative value caused by wait time)

You can increase the state space to double or triple its size to accommodate for time, by appending a time counter component to the bitmap. in addition to an extra (9th) action of do nothing,

You can find the source code here and here

8
Examples of uses of artificial intelligence at work

7
How do I create an AI for a two-players board game?
7
What is ergodicity in a Markov Decision Process (MDP)?