Hypothetically, the symbol (Triangle) is sticked to an item and i need to find and recognize that symbol and try to calculate the orientation of the item it is sticked into. In degrees. How would you guys suggest i approach this problem? Do i still need NN for this? Thank you :) I just need to hear other people's thoughts. 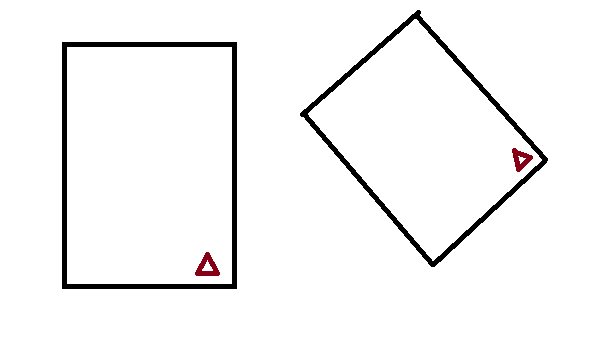 This is a quite trivial problem and using a NN would be overkill for this. The symbol you used (triangle) is problematic, because it looks exactly the same in 3 different positions (rotated 0°, 120° and 240°).

The easiest implementation would be using 2 distinguishable points with a fixed distance. To distinguish them you could color code them or give them different sizes. Those 2 points should be easy to identify in your picture using a pattern matching algorithm. Once you have the 2 points you calculate the vector between them and can then calculate the orientation of the vector, which basically tells you the orientation of the whole object your symbol is put on.

The basic idea is the same, no matter what symbol you use. In case of the "L", your 2 points would be the end of both lines. You can easily find the symbol, calculate the vector between both points and use it to calculate the orientation using this vector. This approach can be used for every symbol that doesn't have radial symmetry. You can always define 2 points in this symbol and apply the method described.

The reason why a NN is overkill is the simplicity of the problem. NNs are mostly used for problems that are easy to solve for humans but very hard to implement with a simple algorithm. Tasks like classifying images, identifying hand written or distorted letters and so on. But your problem is easily solvable with simple algorithms, therefore the complexity of a NN is not necessary.

This doesn't mean that your task cannot be implemented with an NN. Actually it might be quite an interesting project to learn more about NNs. I would say your best bet is implementing it as a CNN, since this type of NN is good at detecting features in images like the direction of your symbol. I can recommend this course from Stanford University, if you want to learn more about CNNs.

For a real world application, there is no need to take the complex route using NNs. My suggested algorithm can be implemented with a few dozen lines of code and should be very robust.

Not the answer you're looking for? Browse other questions tagged neural-networks image-recognition or ask your own question.

8
Neural network architecture for author name as an input?
2
Identifying if an image contains an object with very small (five image) training data set
4
How to identify the face of a certain customer in a grocery store?
3
Detecting license plate using tensorflow
2
How can I use Generative Adversarial Networks to solve the imbalanced class problem?
1
How to approach this handwritten digit recognition?
2
Why is this ResNet50 misclassifying objects?
0
classification of unseen classes of image in open set classification