I'm learning about the restricted Boltzmann machine (RBM), and I just came up with two naive understandings of this model. But it seems these two understandings are so different.

Let's say I have only one image, and I transform this image into a binary vector and feed this vector into an RBM with random variables (all the weights and biases are chosen randomly). Then, by turning on the machine, the first hidden vector would be constructed. But this hidden vector does not tell us anything, it would be only used to reconstruct a visible vector. (My understanding for this reconstructed visible vector is this vector is a vector encoded in the defined RBM in the first place, we are not really construct something new, but we just happen to sample this vector from the defined RBM). And we just run this loop of construction and reconstruction for infinitely many times. Finally, what we will get is just the probability distribution encoded in this RBM with random variables.

Given an RBM, each hidden unit of the RBM would be a classifier, and what it does is to check the input vector lies in which side of the hyperplane defined by these hidden units (by its weights and bias). So, if we input an image into this RBM, the RBM will project this input vector onto many hyperplanes defined by all the hidden units, and thus for an input vector, the corresponding hidden vector is very important. It is some abstract representation. And we can further feed this representation into other learning models.

If you can answer this question by explaining how RBM is used for MNIST that would be extremely helpful for me.

The hidden units are just structural support and we don't care about what those hidden vectors really are.

Generative modeling is concerned about $P(X)$, to be able to compute it, we use representation learning (aka deep learning) to identify and disentangle the underlying explanatory factors hidden in the observed data, because if we could separate them out like this

where $Z$ could encode not just the digit identity but the angle that the digit is drawn, the stroke width, and also abstract stylistic properties.

Any classifier for some task will decide which of those $z$ elements could help him to make a better decision, i.e. just the part that holds the digit identity and ignore the rest, this kind of modeling is called distributed representation, where each element is a simple indicator about some feature.

No conditional dependency within a layer

RBM is an undirected graphical model and no conditional dependency within a layer. Thus, the conditional distribution over the hidden units $h$ given the input image $v$ factorizes, that is

And the conditional distribution over the visible units $v$ given the hidden units $h$ also factorize.

Inference in RBM is tractable and we could compute $p(z|x)$, but the tractability of the RBM does not extend to its partition function.

To minimize the negative log-likelihood of the data, consider the following equation.

The second term is nothing less than an expectation over all possible configurations of the input $x$ (under the distribution $P$ formed by the model).

So, we use Monte Carlo based algorithms to replace the expectation with an average sum. Samples of $p(x)$ from the model can be obtained by running a Markov chain to convergence, using Gibbs sampling as the transition operator.

A step in the Markov chain is thus taken as follows:

So, we have the formulas.

In theory, each parameter update in the learning process would require running one such chain to convergence. It is needless to say that doing so would be prohibitively expensive. As such, several algorithms have been devised for RBMs, see Contrastive Divergence.

We initialize the Markov chain with a training example (i.e., from a distribution that is expected to be close to $p$, so that the chain will be already close to having converged to its final distribution $p$).
CD does not wait for the chain to converge. Samples are obtained after only $k$-steps of Gibbs sampling. In practice, $k=1$ has been shown to work surprisingly well. 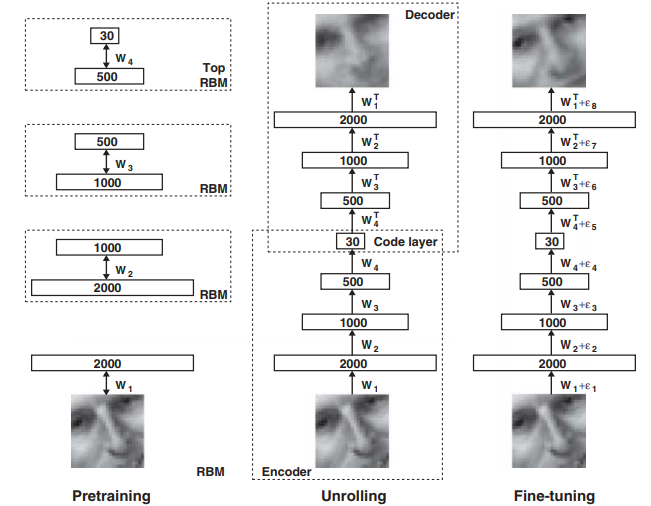 RBM vs VAE and GAN

Side note: RBM is now obsolete, see VAE, GAN they are way better at modeling the manifold in which the data is concentrated, yet you could sample from the manifold directly with a single inference step.

2
Purpose of the hidden variables in a Restricted Boltzmann Machine

1
What is the difference between a stacked restricted Boltzmann machine and deep belief network?
3
Why is the last layer of a DBN or DBM used for classification task?
3
Which online machine learning technique to use for multi-class classification problem with multiple inputs?
2
Does the encoding of a restricted Boltzmann machine improve with more layers?