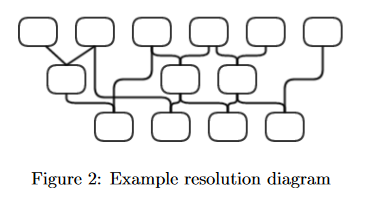 This is a homework for first order logic. The task itself is easy. Only the third point on the list “prove by contradiction” is a bit more difficult to interpret, as the term prove is not defined exactly in a mathematical context.

In the domain of game theory, to prove something means to find a walk-through for the game. If something was proven, a plan was found to bring the system from the initial state into the goal state. In the case of propositional logic the possible numbers of plans is low, so in most cases it is easy to find a plan. In a real life problem, finding the plan is equal to search in the state space.

At first, the sentences have to converted into boolean expressions:

Then the rules of the game have to be formalized:

The rules are equal to the game-mechanics, that means the game engine calculates the future state for a given input. As mentioned above, to prove is equal to finding a plan. That means we have a goal state ("Dog made a mess"), and now it is possible to search with backtracking for a plan which will produce “D=true”.

Not the answer you're looking for? Browse other questions tagged logic or ask your own question.

7
What is meant by “known” in “A knowledge-base exhibits complete knowledge iff for every P (within its vocabulary) P or ~P is known”
4
Why do knowledge-based agents only add a sentence to the knowledge base when it is 100% sure the sentence is true?
2
AI Knowledge Based System: I am having difficulties understanding proposition logic
7
What are the current trends/open questions in logics for knowledge representation?
1
Possible to translate generic English-language document into higher-order logic?