I have a set of images that I already trained a CNN to classify successfully. I wonder if it would be possible to encode the images (using XOR in combination with a key of the same length as the image) and train a new net on them.

Thinking logically, the features still exist in the same relation to each other, just in a different form (encoded). Considering that neural networks are incredible at pattern recognition, I assume that it would still be doable.

For people, who cannot imagine how a xor-encoded image would look like: 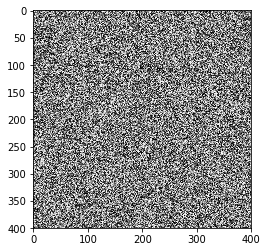 For a human, it may look like rubbish, but the information is definitely there.

Would love to read your opinion.

First you should give it a try, because anyone's guess could be off, as there isn't really a complete high level analytic model of how neural networks behave on real data. Most results with neural networks are informed by theory, but involve a whole lot of experimental testing.

I suspect your network might at least learn something from the new images, but would struggle to get anything like the same accuracy as without the noise, because the CNN filters rely on being able to detect similar features at different positions. In your scrambled image, there will not be any meaningful and consistent edges/corners etc that a single learned feature detector could learn to match (and therefore present to the next layer).

A fully-connected network would not have this limitation, and would learn just as well on a set of binary features that have been xor'd identically in each position for each example, as it did on the original copy (i.e. only if the picture was 1 bit depth). It would learn less well if each feature was a scaled 8-bit pixel value that was xor'd with the same 8 bit random number in each pixel position, because that would introduce many more non-linear mappings between input and output. Of course a fully-connected network will generally not learn image tasks as well as CNNs in the first place . . . but if it could learn anything useful at all for your image problem, then it will probably out-perform CNNs after the scrambling effect.

As a CNN usually has a few fully-connected layers, then it may be possible to get something from your scrambled images.

Thinking logically, the features still exist in the same relation to each other, just in a different form (encoded)

In terms of being recognisable in the way that a CNN filter extracts them, then the features do not exist. That is a problem.

The answer to your question depends on the nature of the noise that you have xor-ed the image with. If it is the case that the noise is random (or pseudorandom in the formal sense), then it is provably the case that the original pattern will not be learnable in the statistical learning theory sense; this scenario is equivalent to the application of a one-time pad.

To quote the relevant Wikipedia article:

One-time pads are "information-theoretically secure" in that the encrypted message (i.e., the ciphertext) provides no information about the original message to a cryptanalyst (except the maximum possible length[16] of the message). This is a very strong notion of security first developed during WWII by Claude Shannon and proved, mathematically, to be true for the one-time pad by Shannon about the same time.

My gut feel based on the paper I will mention below is that YES, if you apply the same XOR operation on the train and test data, you will be able to train a very "accurate" classifier.

To elaborate on my "gut" feel, please allow me to introduce to you what I personally think is one of the most important paper that came out this year(in fact this paper won the best paper award at ICLR 2017):

In this paper, the authors showed that deep learning models will generalize to "any" datasets. To give an example of the sort of experiment they conducted on this paper:

The moral of the story is that contrary to what most researchers believed in the past namely that deep learning models magically discover lower level features, middle-level features, and higher-level features hidden within the dataset more like the V1 system of the mammalian brain by learning to compress data, they seem to just memorize anything you give them, including random data.

I must say, this are very worrying findings - to me at least.

Not the answer you're looking for? Browse other questions tagged neural-networks convolutional-neural-networks image-recognition or ask your own question.