What is the purpose of an activation function in neural networks?

It is said that activation functions in neural networks help introduce non-linearity.

Almost all of the functionalities provided by the non-linear activation functions are given by other answers. Let me sum them up:

This is one of the most common activation function and is monotonically increasing everywhere. This is generally used at the final output node as it squashes values between 0 and 1 (if the output is required to be 0 or 1). Thus above 0.5 is considered 1 while below 0.5 as 0, although a different threshold (not 0.5) maybe set. Its main advantage is that its differentiation is easy and uses already calculated values and supposedly horseshoe crab neurons have this activation function in their neurons.

This has an advantage over the sigmoid activation function as it tends to centre the output to 0 which has an effect of better learning on the subsequent layers (acts as a feature normaliser). A nice explanation here. Negative and positive output values maybe considered as 0 and 1 respectively. Used mostly in RNN's.

Re-Lu activation function - This is another very common simple non-linear (linear in positive range and negative range exclusive of each other) activation function that has the advantage of removing the problem of vanishing gradient faced by the above two i.e. gradient tends to 0 as x tends to +infinity or -infinity. Here is an answer about Re-Lu's approximation power in-spite of its apparent linearity. ReLu's have a disadvantage of having dead neurons which result in larger NN's.

For example, say you are trying to approximate a single-variable quadratic function say $a.x^2 + c$. This will be best approximated by a quadratic activation $w1.x^2 + b$ where$w1$ and $b$ will be the trainable parameters. But designing a loss function that follows the conventional first-order derivative method (gradient descent) can be quite tough for non-monotonically increasing function.

The $tanh$ activation can work in the same way since output of $|tanh| < 1$. I am not sure how Re-Lu's work though, but due to its rigid structure and problem of dead neurons we require larger networks with ReLu's for a good approximation.

But for a formal mathematical proof, one has to look at the Universal Approximation Theorem.

For non-mathematicians some better insights visit these links:

How does neural network classifier classify from just drawing a decision plane?

If you only had linear layers in a neural network, all the layers would essentially collapse to one linear layer, and, therefore, a "deep" neural network architecture effectively wouldn't be deep anymore but just a linear classifier.

where $W$ corresponds to the matrix that represents the network weights and biases for one layer, and $f()$ to the activation function.

Now, with the introduction of a non-linear activation unit after every linear transformation, this won't happen anymore.

Each layer can now build up on the results of the preceding non-linear layer which essentially leads to a complex non-linear function that is able to approximate every possible function with the right weighting and enough depth/width.

Let's first talk about linearity. Linearity means the map (a function), $f: V \rightarrow W$, used is a linear map, that is, it satisfies the following two conditions

You should be familiar with this definition if you have studied linear algebra in the past.

However, it's more important to think of linearity in terms of linear separability of data, which means the data can be separated into different classes by drawing a line (or hyperplane, if more than two dimensions), which represents a linear decision boundary, through the data. If we cannot do that, then the data is not linearly separable. Often times, data from a more complex (and thus more relevant) problem setting is not linearly separable, so it is in our interest to model these.

Different activation functions are used for different problem setting contexts. You can read more about that in the book Deep Learning (Adaptive Computation and Machine Learning series).

For an example of non linearly separable data, see the XOR data set. 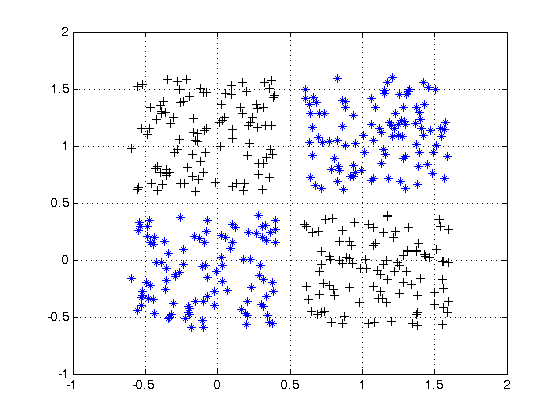 Can you draw a single line to separate the two classes?

Consider a very simple neural network, with just 2 layers, where the first has 2 neurons and the last 1 neuron, and the input size is 2. The inputs are $x_1$ and $x_1$.

The conclusion: without nonlinearity, the computational power of a multilayer NN is equal to 1-layer NN.

Also, you can think of the sigmoid function as differentiable IF the statement that gives a probability. And adding new layers can create new, more complex combinations of IF statements. For example, the first layer combines features and gives probabilities that there are eyes, tail, and ears on the picture, the second combines new, more complex features from the last layer and gives probability that there is a cat.

Non-linearity is not the correct mathematical term. Those that use it probably intend to refer to a first degree polynomial relationship between input and output, the kind of relationship that would be graphed as a straight line, a flat plane, or a higher degree surface with no curvature.

To model relations more complex than y = a1x1 + a2x2 + ... + b, more than just those two terms of a Taylor series approximation is needed.

The attenuation grids are simply matrix-vector products, the matrix being the parameters that are tuned to create a circuit that approximates the more complex curved, multivariate function with simpler curved functions.

Oriented with the multi-dimensional signal entering at the left and the result appearing on the right (left-to-right causality), as in the electrical engineering convention, the vertical columns are called layers of activations, mostly for historical reasons. They are actually arrays of simple curved functions. The most commonly used activations today are these.

The identity function is sometimes used to pass through signals untouched for various structural convenience reasons.

These are less used but were in vogue at one point or another. They are still used but have lost popularity because they place additional overhead on back propagation computations and tend to lose in contests for speed and accuracy.

The more complex of these can be parametrized and all of them can be perturbed with pseudo-random noise to improve reliability.

Why Bother With All of That?

Artificial networks are not necessary for tuning well developed classes of relationships between input and desired output. For instance, these are easily optimized using well developed optimization techniques.

For these, approaches developed long before the advent of artificial networks can often arrive at an optimal solution with less computational overhead and more precision and reliability.

Where artificial networks excel is in the acquisition of functions about which the practitioner is largely ignorant or the tuning of the parameters of known functions for which specific convergence methods have not yet been devised.

Multi-layer perceptrons (ANNs) tune the parameters (attenuation matrix) during training. Tuning is directed by gradient descent or one of its variants to produce a digital approximation of an analog circuit that models the unknown functions. The gradient descent is driven by some criteria toward which circuit behavior is driven by comparing outputs with that criteria. The criteria can be any of these.

In summary, activation functions provide the building blocks that can be used repeatedly in two dimensions of the network structure so that, combined with an attenuation matrix to vary the weight of signaling from layer to layer, is known to be able to approximate an arbitrary and complex function.

The post-millenial excitement about deeper networks is because the patterns in two distinct classes of complex inputs have been successfully identified and put into use within larger business, consumer, and scientific markets.