For example, the output of layer 1 would be fed to the input of layers 2, 3, 4, etc. Beyond computational power considerations, wouldn't this be better than only connecting layers 1 and 2, 3 and 4, etc?

I happened to make a presentation of a paper that talks about this topic. These networks are called DenseNets, which stands for densely connected convolutional networks. Just like in your question, within a dense block, the output of each layer is given as input to all subsequent layers. Put another way, in a normal feed-forward neural network the $l$th layer is a function of the previous output $x_l = H(x_{l-1})$, while in the dense net each layer is a function of all the previous outputs $x_l = H([x_0, x_1, \dots, x_{l-1}])$. 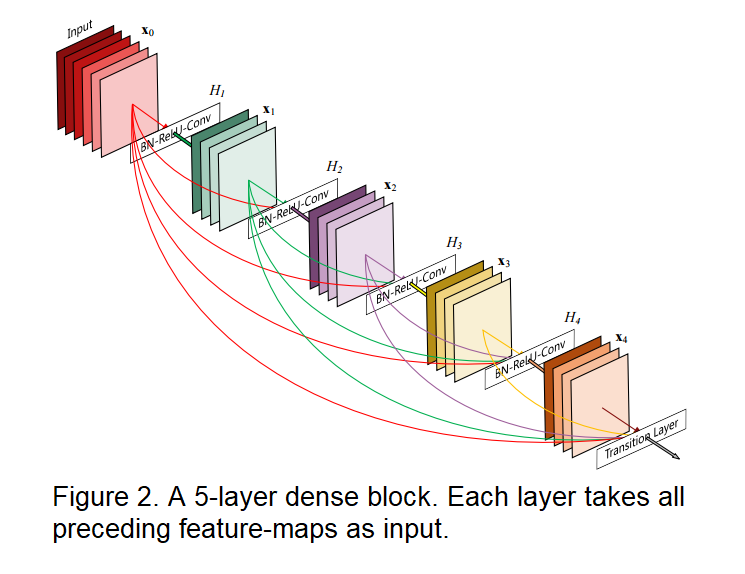 However, since it is a CNN, there is a reduction in the size of the feature maps with each pooling layer, so to keep the dimensions constant, there is an alternation between the dense block and pooling layers.

The results are clear: not only in almost all the tests the accuracy of the dense net is greater than that of the other methods, but they do so using up to 90% fewer parameters, i.e. they have a high efficiency of parameters. Moreover, as suggested by the authors themselves, the improved accuracy can be explained by the shorter connections between the layers, which allow acting during the training phase in a deep supervision fashion, solving the vanishing gradient problem. This is similar to how it was done in other methods, but with a less complicated gradient.

If you're interested you should definitely check out their paper Densely Connected Convolutional Networks (2018).

14
Should deep residual networks be viewed as an ensemble of networks?
5
Are neurons instantly feed forward when input arrives?
6
How to create and train (with mutation and selection) a neural network to predict the next state of a board?
3
If vanishing gradients are NOT the problem that ResNets solve, then what is the explanation behind ResNet success?
0
Is there a neural network that accepts both the current input and previous output?
1
Residual Blocks - why do they work?