I strongly suspect that this model has been simplified, but how much?

How much does, say, the vanilla NN differ from what we know about the human brain? Do we even know?

We can analyze the differences and similarities between ANNs and BNNs in terms of the following components.

The following diagram illustrates a biological neuron (screenshot of an image from this book). 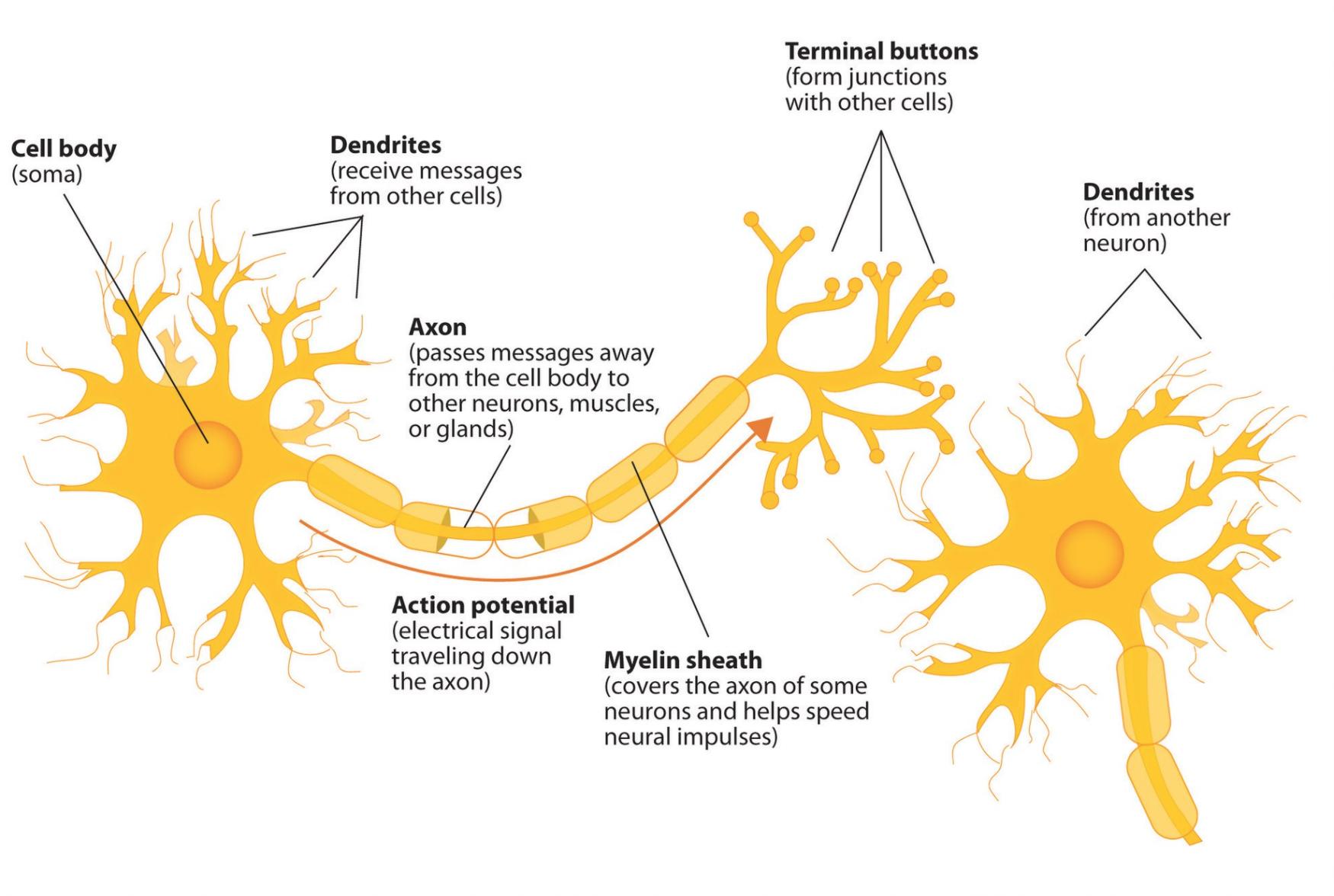 The following one illustrates a typical artificial neuron of an ANN (screenshot of figure 1.14 of this book).

ANNs are trained from scratch usually using a fixed topology (remember topology changes in case of BNNs), although the topology of ANN can also change (for example, take a look at NEAT or some continual learning techniques), which depends on the problem being solved. The weights of an ANN are randomly initialized and adjusted via an optimization algorithm.

Another difference (although this difference is always smaller) is in the number of neurons in the network. A typical ANN consists of hundreds, thousands, millions, and, in some exceptional (e.g. GPT-3), billions of neurons. The BNN of the human brain consists of billions. This number varies from animal to animal.

You can find more information here or here.

They are not close, not anymore!

[Artificial] Neural Nets vaguely inspired by the connections we previously observed between the neurons of a brain. Initially, there probably was an intention to develop ANN to approximate biological brains. However, the modern working ANNs that we see their applications in various tasks are not designed to provide us a functional model of an animal brain. As far as I know, there is no study claiming they have found something new in a biological brain by looking into the connections and weight distributions of let's say a CNN or RNN model.

The common statement that Artificial Neural Networks are inspired by the neural structure of brains is only partially true.

It is true that Norbert Wiener, Claude Shannon, John von Neuman, and others began the path toward practical AI by developing what they then called the electronic brain. It is also true

but that is the extent of the similarity. Cells in artificial networks such as MLPs (multilayer perceptrons) or RNN (Recurrent neural networks) are not like cells in brain networks.

The perceptron, the first software stab at arrays of things that activate, was not an array of neurons. It was the application of basic feedback involving gradients, which had been in common use in engineering ever since James Watt's centrifugal governor was mathematically modeled by Gauss. Successive approximation, a principle that had been in use for centuries, was employed to incrementally update an attenuation matrix. The matrix was multiplied by the vector feeding an array of identical activation functions to produce output. That's it.

The projection in a second dimension to a multi-layer topology was made possible by the realization that the Jacobian could be used to produce a corrective signal that, when distributed as negative feedback to the layers appropriately, could tune the attenuation matrix of a sequence of perceptrons and the network as a whole would converge upon satisfactory behavior. In the sequence of perceptrons, each element is called a layer. The feedback mechanism is now called back propagation.

The mathematics used to correct the network is called gradient descent because it is like a dehydrated blind man using the gradient of the terrain to find water, and the issues of doing that are similar too. He might find a local minima (low point) before he finds fresh water and converge on death rather than hydration.

The newer topologies are the additions of already existing convolution work used in digital image restoration, mail sorting, and graphics applications to create the CNN family of topologies and the ingenious use of what is like a chemical equilibrium from first year chemistry to combine optimization criteria creating the GAN family of topologies.

Deep is simply a synonym for numerous in most AI contexts. It sometimes infers complexity in the higher level topology (above the vector-matrix products, the activations, and the convolutions).

Active research is ongoing by those who are aware how different these deep networks are from what neural scientists have discovered decades ago in mammalian brain tissue. And there are more differentiators being discovered today as learning circuitry and neuro-chemistry in the brain is investigated from the genomic perspective.

[1] Topology is ironically both a subset of architecture (in the fields of building design, network provisioning, WWW analysis, and semantic networks), yet at the same time topology is, much more than architecture, at the radical center of both AI mathematics and effective actualization in control systems

[2] The role of chemistry may be essential to learning social and reproductive behavior that interrelates with DNA information propagation, linking in complex ways learning at the level of an ecosystem and the brain. Furthermore, long term and short term learning divides the brain's learning into two distinct capabilities too.

[3] The impact of the timing of incoming signals on biological neuron activation is understood to some degree, but it may impact much more than neuron output. It may impact placticity and chemistry too, and the organelles may play a role in that.

What machine learning libraries do is as much simulating the human brain as Barbie and Ken dolls simulate a real couple.

Nonetheless, remarkable things are arising in the field of deep learning, and it would not surprise me if autonomous vehicles become fully autonomous in our lifetimes. I would not recommend to any students to become a developer either. Computers will probably code much better than humans and orders of magnitude faster, and possibly soon. Some tasks are not of the kind that biology has evolved to do and computers can exceed human capabilities after only a few decades of research, eventually exceeding human performance by several orders of magnitude.

Not the answer you're looking for? Browse other questions tagged neural-networks comparison brain .

3
What is the difference between human brains and neural networks?
7
Which artificial neural network can mimic biological neurons the most?
1
How does the degree of neuronal realism affect computing in a deep learning scenario?