I've been reading Google's DeepMind Atari paper and I'm trying to understand the concept of "experience replay". Experience replay comes up in a lot of other reinforcement learning papers (particularly, the AlphaGo paper), so I want to understand how it works. Below are some excerpts.

First, we used a biologically inspired mechanism termed experience replay that randomizes over the data, thereby removing correlations in the observation sequence and smoothing over changes in the data distribution.

The paper then elaborates as follows (I've taken a screenshot, since there are a lot of mathematical symbols that are difficult to reproduce): 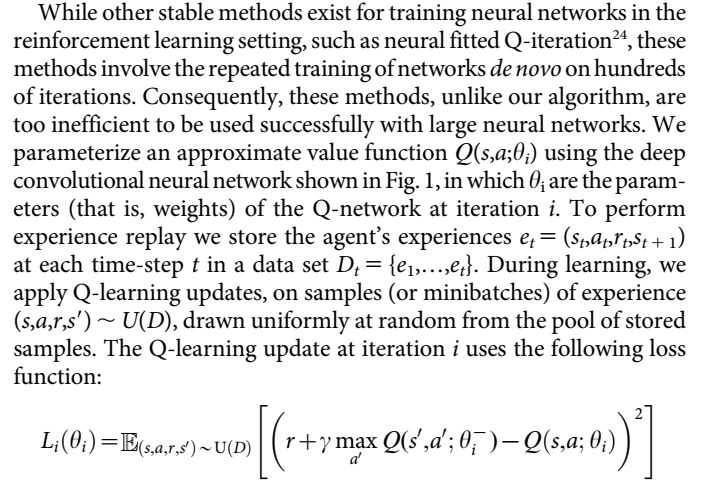 What is experience replay and what are its benefits in laymen's terms?

The elements of this type of sequences are often temporally correlated. What does this mean? For example, suppose that states are frames of a video game (that is, each frame is a different state). In this context, successive frames (or states) are similar to each other, which mathematically means that they are correlated.

It turns out that neural networks (NNs) are able to approximate (almost) any function. In RL, a policy is also a function: it is a function from a state to an action (or probability distribution over actions). So, we can represent a policy using a NN. (Deep RL is essentially a combination of traditional RL algorithms, like Q-learning, with NNs).

Moreover, it also turns out that training a NN using back-propagation with data that is temporally correlated might lead the NN not to capture the essential characteristics of the data, which, in practice (during training), means that we are not able to find the NN that represents the optimal policy (or another function, e.g. $Q(s, a)$, used later to retrieve the policy). In such cases, we often say that the training of the NN is not stable.

An experience replay (ER) buffer is an array/list (or buffer) $D = [e_1, \dots, e_N ]$ where you store the transitions that the agent collects while interacting with the environment. These transitions are usually represented as tuples of the form $e_t = (s_t, a_t, r_t, s_{t+1})$, where

The agent then samples (e.g. uniformly) transitions from this ER buffer $D$ to perform an update of the value function $\hat{q}(s, a)$. The ER buffer $D$ can thus be thought of as a dataset.

Why do we need it?

The motivation for experience replay (in the DQN paper that popularized this technique) is that learning becomes more stable. In fact, the authors of the DQN paper write

To alleviate the problems of correlated data and non-stationary distributions, we use an experience replay mechanism [13] which randomly samples previous transitions, and thereby smooths the training distribution over many past behaviors.

By using experience replay the behavior distribution is averaged over many of its previous states, smoothing out learning and avoiding oscillations or divergence in the parameters.

Not the answer you're looking for? Browse other questions tagged deep-learning reinforcement-learning deep-rl experience-replay .