Why does self-playing tic-tac-toe not become perfect?

I trained a DQN that learns tic-tac-toe by playing against itself with a reward of -1/0/+1 for a loss/draw/win. Every 500 episodes, I test the progress by letting it play some episodes (also 500) against a random player.

As shown in the picture below, the net learns quickly to get an average reward of 0.8-0.9 against the random player. But, after 6000 episodes, the performance seems to deteriorate. If I play manually against the net, after 10000 episodes, it plays okay, but by no means perfect.

Assuming that there is no hidden programming bug, is there anything that might explain such a behavior? Is there anything special about self-play in contrast to training a net against a fixed environment? 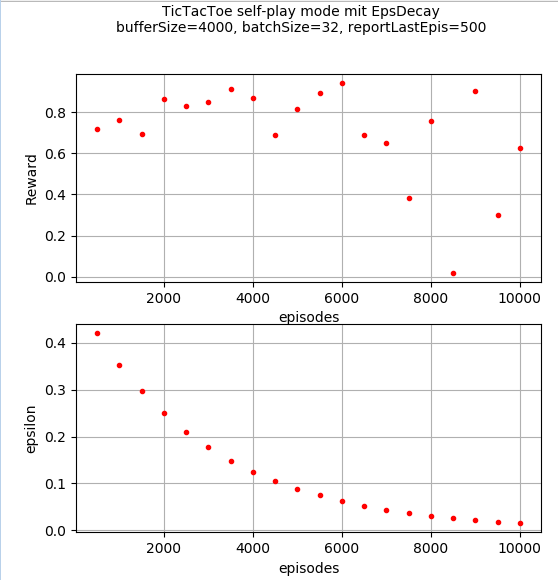 The net has two layers with 100 and 50 nodes (and a linear output layer with 9 nodes), uses DQN and a replay buffer with 4000 state transitions. The shown epsilon values are only used during self-play, during evaluation against the random player exploration is switched off. Self-play actually works by training two separate nets of identical architecture. For simplicity, one net is always player1 and the other always player2 (so they learn slightly different things). Evaluation is then done using the player1 net vs. a random player which generates moves for player2.

There are lots of ways that RL agents can fail to learn properly, so you are faced with a little bit of experimentation and maybe bug hunting unfortunately. However, from the description you have given in the question and comments, I can make a few observations and guesses about where to look:

Regarding your use of two opposing agents, I can see two possible improvements:

Both of these ideas will free you up from caring about the value of epsilon, or decaying it - you can probably just leave it fixed at e.g. 0.1

Finally, as a test of whether your agent can cope with learning optimal play in general, you could have it learn against an already optimal agent. That is obviously not something you can do for more complex games, but might help you debug agent code and hyper-parameters of the network - it divides your problem up into "can it learn this at all" and "can it learn through self-play".

As epsilon is throttled down networks 1 and 2 can freely specialize to producing tic-tac-toe's well-known non-losing behaviour against quasi-perfect adversaries without encoding any non-losing or winning behaviour against random (in other words, bad) adversaries. I suggest while training network 1 (1st mover) and reducing epsilon-1 you keep the 2nd mover's epsilon-2 to values distinctly above 0, indeed why not fixed. Vice-versa for training the 2nd mover.

3
Given these two reward functions, what can we say about the optimal Q-values, in self-play tic-tac-toe?

2
How to use DQN to handle an imperfect but complete information game?
3
Given these two reward functions, what can we say about the optimal Q-values, in self-play tic-tac-toe?
1
How to make the RL player a perfect/expert (tic-tac-toe/chess) player?
1
Generalising performance of Q-learning agent through self-play in a two-player game (MCTS?)
2
How to fight with unstability in self play?
1
How are rewards calculated for episodic tasks like playing chess or tic-tac-toe?