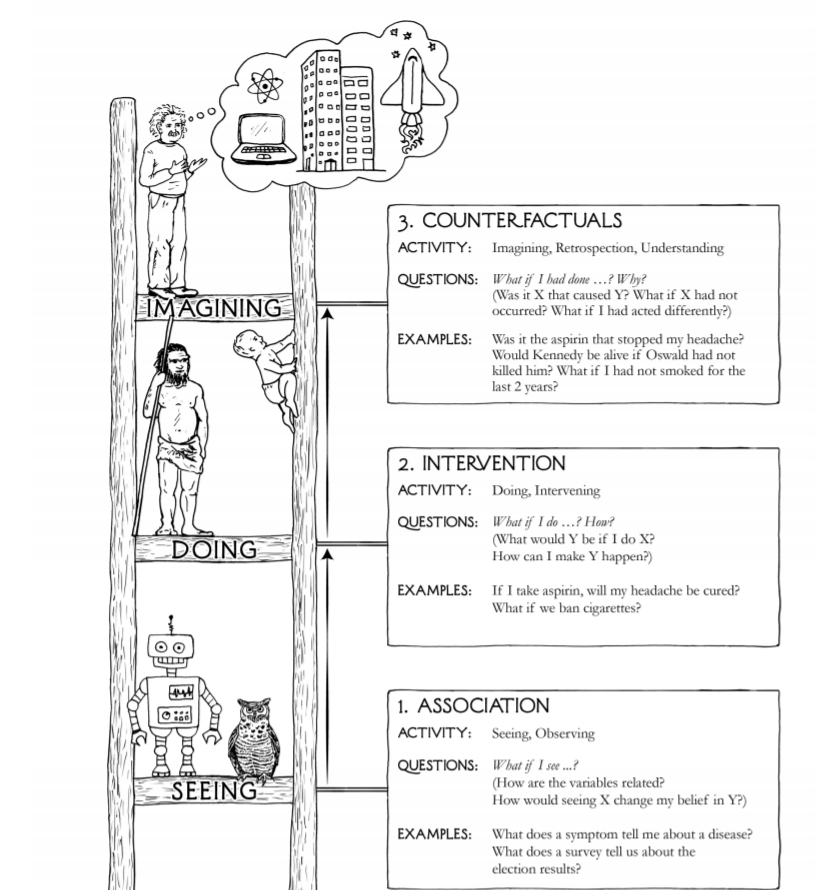 Judea Pearl's 2018 comment on ACM.org, in his To, Build Truly Intelligent Machines, Teach Them Cause and Effect is piercing truth.

How can rationality be excluded from the list of important human features of intelligence, which is what these two assertions are taken together would mean?

Is the human brain a network of sophisticated curve fitters? Marvin Minsky's famous quote, "The brain happens to be a meat machine," was offered without proof, and neither a proof of his trivialization of the human brain nor a proof that the brain is beyond the reach of Turing computability has been offered since.

Those last two bullet items are where the paradigm breaks down and where many AI researchers and authors have correctly stated that machine learning has significant limitations when based solely on layers of multi-layer perceptrons and convolution kernels. Furthermore, the last bullet item is grossly oversimplified in its current state, probably by orders of magnitude. Even if Minsky is correct that a computer can perform what the brain does, the process of reading and understanding this paragraph could easily have a thousand different kinds of unique process components in patterns of internal workflow with massive parallelism. Imaging technology indicates this probability. We have computers modelling only the simplest peripheral layers.

Other questions here investigate whether these sophisticated curve fitters can perform elements of cognition or reasoning.

The higher forms are appreciation, a sense of realities beyond the scope of scientific measurement, legitimate doubt, love, sacrifice for the good of others or humanity.

The claim that human intelligence is an adaptation that differentiates us from other mammals conflicts with whether we adapt well. We have not been tested. Come the next meteoric global killer with a shock wave of the magnitude of that of the Chicxulub crater's meteor, followed by a few and a thousand years of solar winter and we'll see whether it is our 160,000-year existence or bacteria's 4,000,000,000 year existence that proves more sustainable. In the timeline of life, human intelligence has yet to prove itself significant as an adaptive trait.

Q-learning components, attention-based components, and long-short term memory components are all strictly a surface fitter too, but only by stretching the definition of surface fitting considerably. They have real-time adaptive properties and state, so they can be Turing complete.

Fuzzy logic containers, rules-based systems, algorithms with Markovian properties, and many other component types also play their role and are not surface fitters at all.

In summary, there are points made that have a basis in more than plausibility or a pleasing intuitive quality, however, many of these authors do not provide a mathematical framework with definitions, applications, lemmas, theorems, proofs, or even thought experiments that can be scrutinized in a formal way.

Not the answer you're looking for? Browse other questions tagged deep-learning agi superintelligence or ask your own question.

11
Is there a strong argument that survival instinct is a prerequisite for creating an AGI?
5
Can we destroy an artificial general intelligence without its consent?
10
Can a technological singularity only occur with superintelligence?
6
Is there ever a need to combine deep learning frameworks? (Eg. TensorFlow & Torch)?
3
What are examples of thought experiments against or in favour of strong AI, apart from the Chinese room argument?
8
What event would confirm that we have implemented an AGI system?
6
Is there any programming language designed by deep learning?
1
Do solving system of linear equations required anywhere in contemporarty deep learning?