While reading about least squares implementation for machine learning I came across this passage in the following two photos: 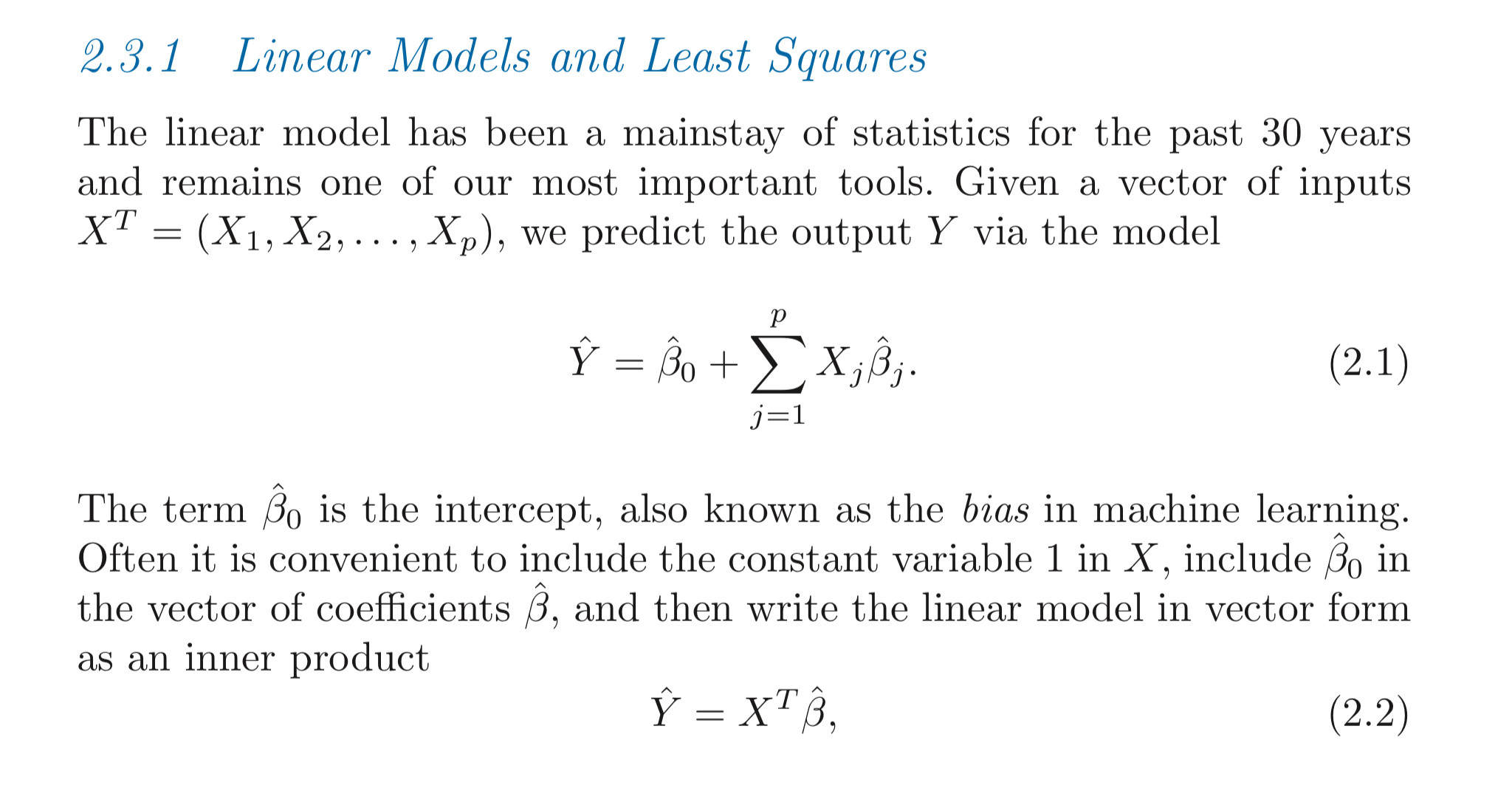 Perhaps I’m misinterpreting the meaning of beta but if X^T has dimension 1 x p and beta has dimension p x K, then hat{Y} would have dimension 1 x K and would be a row vector. According to the text, vectors are assumed column vectors unless otherwise noted.

Can someone provide clarification?

Edit: the matrix notation in this text confuses me. The pages preceding the above passage read:

Should the matrix referenced not have dimensions p x N, assuming a p-vector is a column vector with p elements?

Note: The passage is taken from “Elements of Statistical Learning” by Hastie, Tibshirani, & Friedman.

This is a good example of what happens when you take text out of context.

The passage that was added in the edited question makes a difference, but it's not quite sufficient, and it doesn't help that the notation is all over the place. I found the textbook and the relevant passages (Section 2.3, p. 10-11). Here is a quick attempt at an explanation.

The authors call X a variable (either scalar or vector) with components Xj, but later in the paragraph they refer to Xj as a variable (which I think is the correct notation). Instead of "variable" with "components", think of X as a set of p variables (in the normal sense of a variable, such as temperature, the price of shares, etc.). You can put multiple variables xi (i = 1...p) in a vector X and call each instance of X an observation. In other words, an observation is a set of measured values for all variables xi.

Assume you have made N observations. Arrange your observations in a matrix with N rows and p columns, where each row represents a single observation (an instance of X).

As a side note, observations are usually denoted with superscripts (x(n)) and variables with subscripts (xi) so there is no confusion about which is which. xi(n) is the nth observed (measured) value of variable xi.

In your case, you have a single dependent variable y and p input variables xi (i = 1...p). Assuming that their relation is linear (note: in many cases this assumption is not justified), we can assign weights ("importance") to each variable and try to find out those weights from measurements. In your case, the weights are denoted with betai (so the "importance" of variable xi is betai; note the same subscript).

I hope that this clarifies things up a bit. In summary, the explanation in the textbook is correct, but the notation is hard to follow and at times plain misleading (as in the case of variable and component at the beginning of the section). Honestly, you can get a much more intuitive explanation of linear regression from the Wikipedia article.

I have used W as beta and Y_pred as Y_hat.

Apparently, as far as conventions go both feature vector X and weight vector W are assumed as column vectors. Although this is not important in your case but when we use Neural Nets, this is particularly important, and a weight vector for a layer is given by p*N_n where p is the number of features being input from the previous layer and N_n is the number of nodes in the layer. Check a NN structure and you will understand what I am saying.

As far as the special case in your current question, the book is correct, although comments say Y_predicted should be vector, it is not, since we are doing dot product between X and W (although it is represented in a vectorised form).

If its a NN with K nodes then dimensions for X like p*N and W as p*K is totally possible. The only downside of this notation is that you have to again take a transpose of the result.

Here is the explanation of the notation used:

Not the answer you're looking for? Browse other questions tagged machine-learning linear-regression .