Why Python not C?

I like the enforced indentation of Python that many don't like because I hate parenthetic typing and redundant semicolons. I like the shell interface, but why do some think Python is de facto for machine learning?

We call the filter for convolution a "kernel" and pawn it off to DSPs in GPUs to squeeze out performance then use a scripting language to code in.

Why wouldn't we write deep learning code like Linus Torvalds writes kernel code, with gcc -S so we can make sure the assembly language is efficient and there are almost no cache misses? From a performance point of view, one could fly to the moon and back with C before Python even broke the tree line.

In terms of ease of experimentation, C++ is plenty object oriented so that clean abstractions can be written as .hpp files to configure and govern the kernel-efficient C that does the mechanics of parameter optimization.

We type on keyboards to code and bloc, we program microwave ovens, and some of us play musical keyboards that nicely simulate pianos. We then forget it is C/C++ underneath these highly intuitive user interfaces. I frankly, don't buy the Python argument yet.

Most of us understand that Python wrappers have been created around the efficient matrix algorithms written in FORTRAN and ported to C, and that the Python constructs for ML are relatively elegant, but is that a good reason to dismiss the fact that many C++ libraries for ML that are also elegant have been developed?

The thing you are probably looking for is: 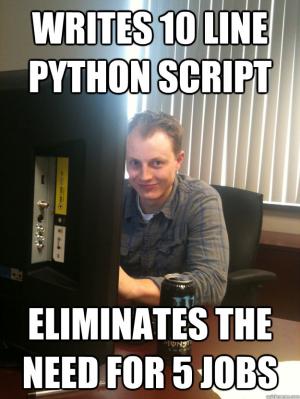 Let us see this question from 2 viewpoints:

Beginner: From a viewpoint of beginner, he needs to understand how to implement a model before optimising it. He first needs to visualise the model, see the kinds of bugs that creep in, experiment with the model to gain more intuition. Certainly possible in C/C++. But is it worth it? The time the person would take to write/debug the code in C/C++ will far outweigh the time to create i in Python/MATLAB/R. So after he gains some intermediate implementation knowledge then he can move on with C/C++.

Experts: By experts I mean programming experts. They most certainly and easily use C/C++. But the main information you missed is TensorFlow which is a ML library by itself and also serves as a core for other high level ML libraries like Keras is programmed in C++ itself. Here is more info about it. So if I am not wrong TensorFlow creates a computational graph before taking in any data, and then runs that graph on the data generally completely loaded in the RAM. So no intereference of Python in between.

Also code readability is a massive problem (at-least I face it), Writing ML algorithm in C/C++ will take huge amounts of code which may become unreadable if you look at it after a week or so if not well documented. Whereas due to inbuilt python functions you can easily read the program.

Advice from Machine Learning expert Andrew Ng, use languages like C/C++ to implement your model once you have verified your model works in a higher level language like MATLAB.

Also as @FauChristian mentioned library support is impeccable, you can combine various other libraries in other fields to convert data into a ML form which will then be used in your ML model.

Because there is a library for Python named NumPy.

It can do extremely fast computations on n-dimensional arrays of numbers, and all kinds of scientific / machine learning / image processing etc libraries are built on top of it.

You don't do actual computation in Python for loops, that's really slow. You call Numpy matrix operations, and they are themselves written in C (and partly in Fortran if I recall correctly, not sure if that's still the case) and mercilessly optimized for speed over the years.

Especially in the case of research, it's extremely important to be able to iterate over ideas rapidly. We need to be able to rapidly implement new ideas, test them, probably go through a few iterations of bugfixing, test again, etc. It's quite rare that the bottleneck in this iteration of ideas is the runtime of a new idea/algorithm. The human's time spent programming tends to be a bottleneck much more often. Ideas can often be tested rapidly on small toy problems which don't take a lot of runtime anyway, or run overnight / run while the programmer is busy writing other code.

Doing all that iterating, quickly implementing new ideas etc. tends to be easier / faster in Python than in C or C++. Of course this is not necessarily true for everyone, if someone already has a lot of experience in C++ and little experience in Python, they may be able to implement new ideas more quickly in C++. This does not appear to be the case for the majority of people though. Clear advantages that Python has in terms of how quickly new ideas can be implemented include:

Another key point is that the majority of code that people in AI write is not the performance-sensitive parts. Again, may not be true for everyone, but is true especially in research settings. Most researchers don't spend the majority of their time writing code for forwards / backwards passes in a Neural Network. They spend much more time on stuff like:

Now that last point may in some cases be performance-sensitive, but still, the initial concern will not be performance. The initial concern will be; will it work at all? This can be evaluated on simpler problems or with less performant code simply by waiting a bit longer first, it's still more important to be able to implement it at all first. As mentioned in other answers, thanks to C-based frameworks like Tensorflow and numpy, these can quite often be performant even from Python though.

Finally, the existence of well-known, easy-to-use, established, open source libraries and frameworks that have stood the test of time is extremely important. In Python, we have:

Again, many of those have parts implemented in C/C++ when performance matters too.

Note that, when I'm talking about research, this doesn't just mean "academia". AI in industry will also often have some flavour of research. People in industry are unlikely to be implementing Neural Networks from scratch over and over and over again. They're much more likely to be re-using implementations that are already efficient (e.g. Tensorflow), but be trying to apply them to new data (where they'll have to write some new boilerplate code around it, which is quick and easy in Python), or trying new architectures, or trying to visualize data and/or results, etc.

The primary reason for Python being preferred is overhead. C++ automatically entails greater overhead in terms of the amount of code required to do any particular thing. Artificial intelligence is difficult to understand conceptually already, which makes programming overhead a larger issue.

With C++ modules being a way to extend the Python language, there is very little reason to not use Python. It is easier to transfer knowledge of programming in C++ to Python rather than figuring out a way to program a library in C++ extensive enough to match the current body of knowledge already incorporated into Python.

Python is popular for rapid prototyping for several reasons.

Because, while C/C++ are not dead, they're hard to use and hard to learn. I used to like them, but now, nobody would make me learn a thing with features like undefined behavior. No way! Memory management? Why should I? I just don't want to waste my time on such stuff... and I guess, that's the common attitude among students.

There'll be always people loving "the old good low level C" and that's a good thing as we need kernels and drivers and such. It has its place.

C++ is higher level, but it's become much too complicated for most of us, who prefer to spend learning time on algorithms rather than on the language itself.

Everything what can be reasonably done with less effort, should not be done with more effort. I was using C++ for years (some long time ago), and spend only a few hours with Python, but I'd always choose the latter for a few thousand lines project because of the efficiency of coding.

The efficiency of execution may be improved later, possibly even by rewriting a small part in C++. Oftentimes, more can be gained by implementing a smarter algorithm.

Not the answer you're looking for? Browse other questions tagged convolutional-neural-networks programming-languages performance efficiency or ask your own question.

2
Why aren't compiled languages as popular as Python in AI?
0
Why there's so much search for Python professionals in AI?

51
Why is Python such a popular language in the AI field?
4
Can someone direct me to a sites and/or videos that can bring an absolute beginner up to speed with AI?
6
Why is Common Lisp, Python and Prolog used in artificial intelligence?
11
What topologies are largely unexplored in machine learning?
6
C# or Python for AI?
6
Why isn't the ElliotSig activation function widely used?
2
Why is informed search more efficient than uninformed search?
2
Why aren't compiled languages as popular as Python in AI?
2
Understanding the intuition behind Content Loss (Neural Style Transfer)