How do you calculate the heuristic value in this specific case?

But, in the following case (picture), how is the value of $h(n)$ calculated? 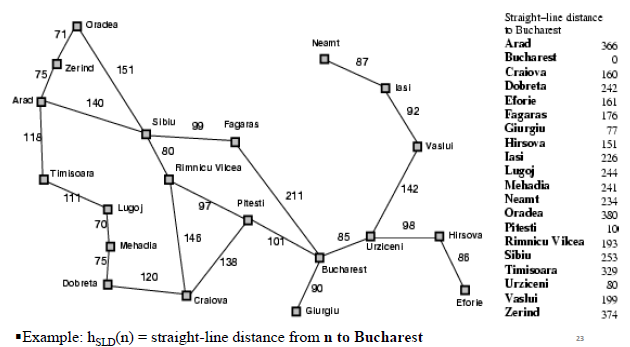 In the picture, $h(n)$ is the straight-line distance from $n$ to the goal node. But how do we calculate it?

Not the answer you're looking for? Browse other questions tagged search heuristics a-star .

2
Is a subset of a problem solution, used to recreate complete solution considered a heuristic?
12
Why is A* optimal if the heuristic function is admissible?
6
How is iterative deepening A* better than A*?
3
How do I find whether this heuristic is or not admissible and consistent?
2
Understanding the proof that A* search is optimal
2
In the graph search version of A*, can I stop the search the first time I encounter the goal node?
3
A* and uniform-cost search are apparently incomplete
1
What is the difference between the heuristic function and the evaluation function in A*?