What is an objective function? 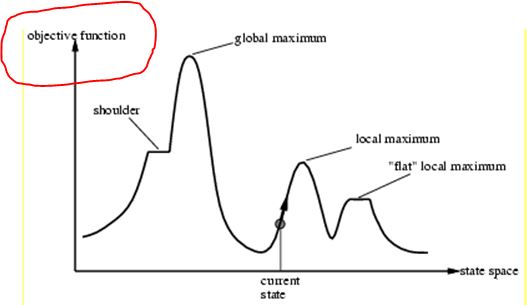 The "objective function" is the function that you want to minimise or maximise in your problem.

The expression "objective function" is used in several different contexts (e.g. machine learning or linear programming), but it always refers to the function to be maximised or minimised in the specific (optimisation) problem. Hence, this expression is used in the context of mathematical optimisation.

For example, in machine learning, you define a model, $\mathcal{M}$. To train $\mathcal{M}$, you usually define a loss function $\mathcal{L}$ (e.g., a mean squared error), which you want to minimise. $\mathcal{L}$ is the "objective function" of your problem (which in this case is to be minimised).

In the context of search algorithms, the objective function could represent e.g. the cost of the solution. For example, in the case of the travelling salesman problem (TSP), you define a function, call it $C$, which represents the "cost" of the tour or Hamiltonian cycle, that is, a function which sums up the weights of all edges in the tour. In this case, the "objective" of your problem is to minimise this function $C$, because, essentially, you want to find an inexpensive tour, which is associated with either a local (or global) minimum of $C$. This function $C$ is the "objective function".

It should now be easy to memorise the expression "objective function", as it contains the term "objective", and the "objective" (or goal) in your (optimisation) problem is to minimise (or maximise) the corresponding function.

Unfortunately, the interface can contain many possible modes, for example the human-operator can control the avatar by speech, by gesture, with a joystick or by numerical parameters. In each case, the objective function is different. That means, a command like “walk to the left” produces a another kind of goal than a joystick movement. In general, the objective function is given by the gui-interface, because the human-operator has pressed on the gui a button, and this command is the goal for the system which has to be reached.

... and a neural network in the second:

Not the answer you're looking for? Browse other questions tagged algorithm search problem-solving or ask your own question.

8
Are there local search algorithms that make use of memory to give better solutions?
3
How to find proper parameter settings for a given optimization algorithm?
11
Why teaching only search algorithms in a short introductory AI course?
2
Does eligibility traces and epsilon-greedy do the same task in different ways?
2
What heuristic to use when doing A* search with multiple targets?
1
Any problems/games/puzzles in which exhaustive search cannot show that a solution does not exist?
7
What are the differences between A* and greedy best-first search?
1
How to improve efficiency of backtracking?
2
Why is a mix of greedy and random usually “best” for stochastic local search?