SARSA won't work for linear function approximator for MountainCar-v0 in OpenAI environment. What are the possible causes?

I am learning Reinforcement Learning from the lectures from David Silver. I finished lecture 6 and went on to try SARSA with linear function approximator for MountainCar-v0 environment from OpenAI.

A brief explanation of the MountainCar-v0 environment. The state is denoted by two features, position, and velocity. There are three actions for each state, accelerate forwards, don't accelerate, accelerate backward. The goal of the agent is to learn how to climb a mountain. The engine of the car is not strong enough to power directly to the top. So speed has to be built up by oscillating in the cliff.

I have used a linear function approximator, written by myself. I am attaching my code here for reference :-

I have tested the gradient descent, and it works as expected. After every epoch, the mean squared error between current estimate of Q and TD-target reduces as expected.

Here is my code for SARSA :-

Basically, for every episode, I fit the linear function approximator to the current TD-target. I have also tried running fit just once per episode, but that also does not yield any winning episode. Fitting 10 times ensures that I am actually making some progress towards the TD-target, and also not overfitting.

However, after running over 5000 episodes, I do not get a single episode where the reward is greater than -200. Eventually, the algorithm choses one action, and somehow the Q-value of other actions is always lesser than this action.

I want to be more clear about this. Say action 2 is the one which is the action which gets selected always after say 1000 episodes. Action 0 and action 1 have somehow, for all states, have their Q-values reduced to a level which is never reached by action 2. So for a particular state, action 0 and action 1 may have Q-values of -69 and -69.2. The Q-value of action 2 will never drop below -65, even after running the 5000 episodes.

One possible cause of SARSA with a linear approximator failing to learn a good policy for the Mountain Car problem is that you are not encoding the environment state, the position and velocity.

In David Silver's Lecture 6 that you mention in your question, he describes the state encoding, which in this case is a tile coding, here: https://youtu.be/UoPei5o4fps?t=3626.

This coarse coding is described in more detail in the Sutton and Barto book, Reinforcement Learning: An Introduction (http://incompleteideas.net/book/the-book.html), in Chapter 9, where different state encodings for linear approximators are described, and Chapter 10, where the Mountain Car problem is discussed.

In my experience, using a tile coding worked in combination with a linear function to solve the Mountain Car task. Using no encoding did not work.

The following plot shows the max q-values (the policy) when using Sarsa with no encoding. The points are colored with the corresponding action of the max q-value to more clearly show the policy the agent will follow. 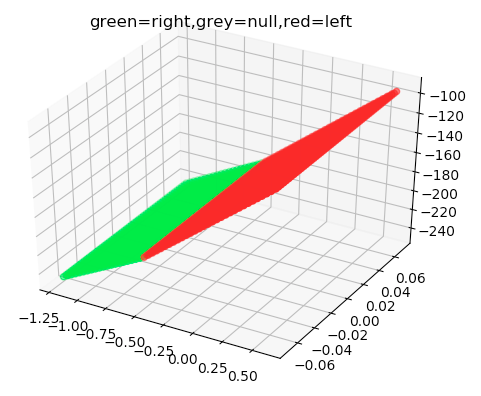 This planar policy produces an average score of -200.0 per episode, averaged over 100 episodes.

Contrast that policy with the following graph of q-values produced by using Sarsa in combination with a tile encoding. 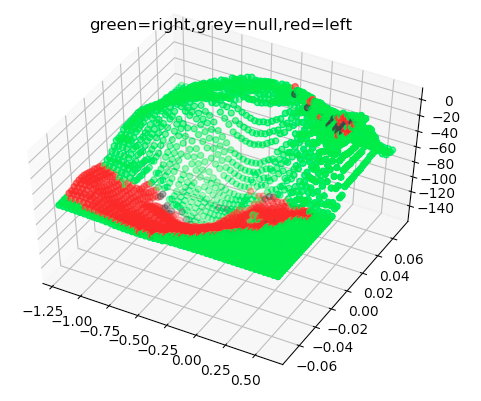 The policy of this agent scores -102.9 per episode, averaged over 100 episodes. It might be hard to see in the graph, but it has the characteristic "spiral" of the learned graph from Figure 10.1 of the Sutton and Barto book.

On doing some research on why this problem might be occurring, I delved into some statistics of the environment. Interestingly, after a small number of episodes (~20), the agent always chooses to take only one action (this has been mentioned in the question too). Also, the Q values of the state-action pairs do not change a lot after just about 20 episodes. Same is the case for policy of environment, as may be expected.

The problem is that, although all the individual updates are being done correctly, the following scenario occurs.

The update equation used is the following :-

But since Q has itself been changed, the target value of the record 3 changes. This is not desirable. Over time, all the changes cancel each other and Q value remains roughly the same.

By using something known as the target function approximator(target network), we can maintain an older version of function approximator, which is used to get the Q-value of next state-action pair while the time of update. This helps avoid the problem and can be used to solve the environment.

Not the answer you're looking for? Browse other questions tagged reinforcement-learning gradient-descent or ask your own question.

1
Agent in toy environment only learns to act optimally with small discount factors
5
How to deal with episode termination in Advantage Actor-Critic algorithm?
3
DQN stuck at suboptimal policy in Atari Pong task
5
How do we compute the target value when the agent ends up in the terminal state?
5
Is Expected SARSA an off-policy or on-policy algorithm?
0
Looping over Sarsa algorithm for better Q values