How can I use a 2-dimensional feature matrix as the input to a neural network?

How can I use a 2-dimensional feature matrix, rather than a feature vector, as the input to a neural network?

For a WWII naval wargame, I have sorted out the features of interest to approximate the game state $S$ at a given time $t$.

The output would be the probability of winning and the level of victory. 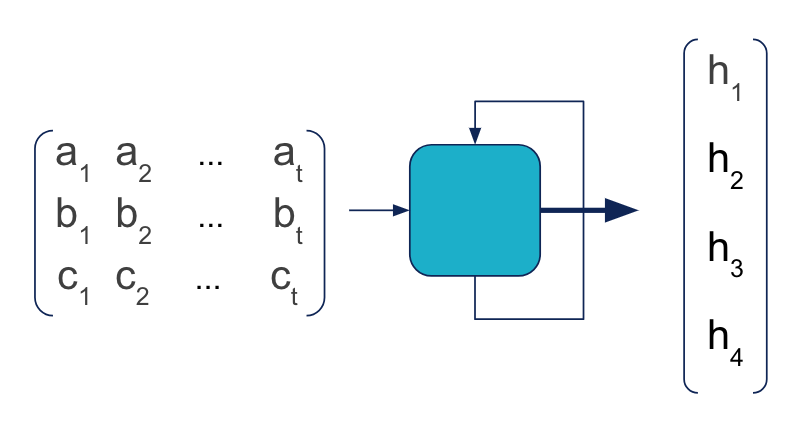 The most obvious way to do this would be to simply "unroll" your matrix into a vector. Your example input matrix would get turned into the following input vector:

I don't think there are any other clear ways to use an "input matrix" really. The only benefit I could see in using an input matrix rather than an unrolled vector (if it were possible to do so in whatever way) would be if doing so would somehow enable the learning algorithm to exploit the "domain knowledge" that certain input features are related to each other in special ways (i.e. features in the same row belong to the same unit, and features in the same column are the same "type" of feature, or other way around). Intuitively, I suspect something like this could be accomplished by restricting the number of connections you make to the next layer. For example, you could make a part of the next layer only be connected to all the $a_i$ features, a different part connected only to all the $b_i$ features, etc. Similarly, you could have a part that is connected only to the $a_1, b_1, c_1, \dots$ features, a different part only connected to the $a_2, b_2, c_2, \dots$ features, etc. I don't know for sure how well this would work though... just think that it could.

(Split the answer from Dennis in two)

A very different approach would be to use a network architecture with recurrence, for example an LSTM. You could treat your input as a "sequence" rather than a matrix (just like a sentence in language processing would be a sequence of inputs), providing your feature vectors for different units as inputs one at a time. This would remove the need of having a giant input layer (with support for 50 units) in cases where only a small portion of them would be used (e.g., if you only have 5 units). There is not really a concept of "time" in your inputs though... ideally the output of your network would be invariant to the order in which you provide it with the different inputs for the different units, but that would not typically be the case with these kinds of architectures in practice.

Not the answer you're looking for? Browse other questions tagged neural-networks game-ai or ask your own question.