I was trying to understand the loss function of GANs, while I found a little mis-match between different papers.

This is the screen-shot from the original paper of Goodfellow at https://arxiv.org/pdf/1406.2661.pdf: 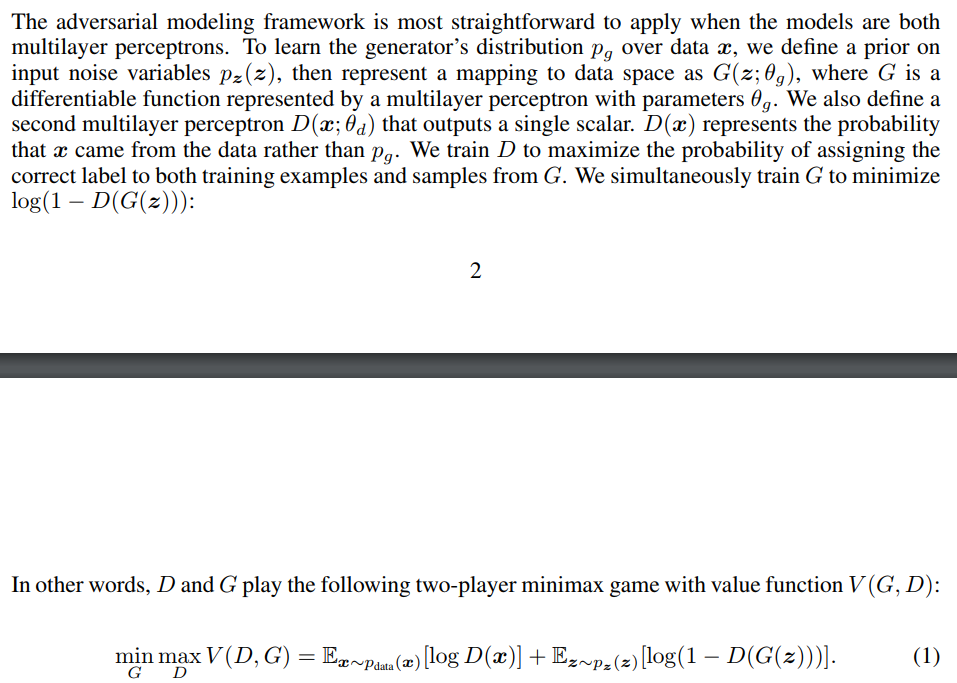 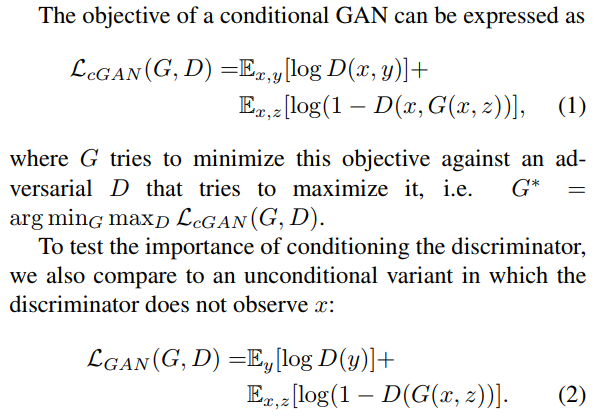 I am not coming from a good math background, so I am quite confused. I'm not sure where the mistake is, but assuming that $E$ is expectation (correct me if I'm wrong), the version in pix2pix makes more sense to me, although I think it's quite less likely that Goodfellow could make this mistake in his amazing paper. Maybe there's no mistake at all and it's me who do not understand them correctly.

What is meant by both papers is that we have two agents (generator and discriminator) playing a game with the value function V defined as a sum of the expectations (i.e. an expectation of the outcome value defined as a sum of two terms, or actually a logarithm of a product...). The generator uses a strategy G encoded in the parameters of its neural network (θg), the discriminator uses a strategy D encoded in the parameters of its neural network (θd). Our goal is to (hopefully) find such a pair of strategies (a pair of parameter sets θgmin and θdmax) that produce the minimax value.

The ideal value for the loss function of the discriminator is 0, otherwise it's greater than 0. The "loss" function of the generator is actually negative, but, for better gradient descent behavior, can be replaced with -log(D(G(z; θg)), which also has the ideal value for the generator at 0. It is impossible to reach zero loss for both generator and discriminator in the same GAN at the same time. However, the idea of the GAN is not to reach zero loss for any of the game agents (this is actually counterproductive), but to use that "double gradient descent" to "converge" the distribution of G(z) to the distribution of x.

The question is about a mismatch between the loss function in two papers on GANs. The first paper is Generative Adversarial Nets Ian J. Goodfellow et. al., 2014, and the excerpt image in the question is this.

The adversarial modeling framework is most straightforward to apply when the models are both multilayer perceptrons. To learn the generator’s distribution $p_g$ over data $x$, we define a prior on input noise variables $p_z (z)$, then represent a mapping to data space as $G (z; \theta_g)$, where $G$ is a differentiable function represented by a multilayer perceptron with parameters $\theta_g$. We also define a second multilayer perceptron $D (x; \theta_d)$ that outputs a single scalar. $D (x)$ represents the probability that $x$ came from the data rather than pg. We train $D$ to maximize the probability of assigning the correct label to both training examples and samples from $G$. We simultaneously train $G$ to minimize $\log (1 − D(G(z)))$:

The second paper is Image-to-Image Translation with Conditional Adversarial Networks, Phillip Isola Jun-Yan Zhu Tinghui Zhou Alexei A. Efros, 2018, and the excerpt image in the question is this.

The objective of a conditional GAN can be expressed as

where $G$ tries to minimize this objective against an adversarial $D$ that tries to maximize it, i.e.

Notice that there is no $y$ in the first paper and the removal of the condition in the second paper corresponds to the removal of $x$ as the first parameter of $D$. This is one of the causes of confusion when comparing the right hand sides. The others are use of variables and degree of explicitness in notation.

The removal of the observation of $x$ from the second right hand term of the second paper's equation (2), which is the first parameter of $G$, the replacement of that equation's $y$ variable with the now freed up $x$ variable, and the acceptance of the abbreviation of the tilda notation used in the first paper then brings both papers into exact agreement.

I'm not sure I understand your question. However responding to your question in the comments. The difference between the two objectives is that:

Not the answer you're looking for? Browse other questions tagged neural-networks deep-learning generative-model or ask your own question.

10
Understanding notation of Goodfellow's GAN objective function
0
Query regarding the minmax loss function formulation of the training of a Generative Adversarial Network (GAN)
1
Why does the discriminator minimize the cross-entropy while the generator maximize it?
0
Optimum Discriminator for label smoothed GAN
3
Mathematical Analysis of the Loss function of GAN