I am working on a DDQN with 5 LSTM layers and 3 actions as output and state space of 21 features. I am dividing the dataset into episodes of 720 timesteps, for each episode the agent acts greedily for the first 480 steps without training, collecting a replay memory, and then update the parameters each step for the subsequent 240 steps using a window size (of 96 steps) randomly sampled from the replay memory (that always saves the last 480).

My problem is that so far the agent learned the optimal policy just once, and it looks like this 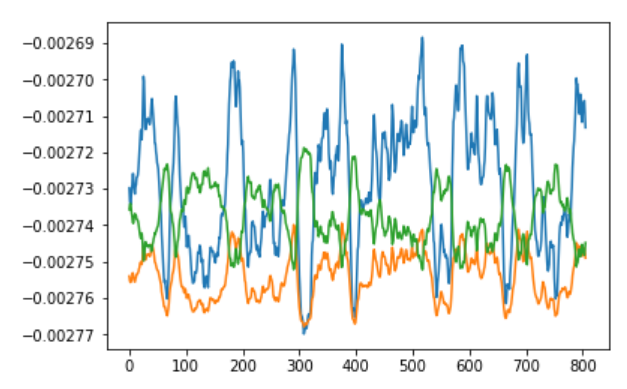 (on the test set, training is off) where, as you can see, the agent dynamically changes its evaluation of the state and acts greedily accordingly. All works fine and the performances are optimal, however, I have to slightly change the normalization of the database and rerun the training to get new parameters fitted to the new database.

Trying to get to the same result has been proven impossible so far, (even keeping all settings the same!) because most of the time the agent learns to keep its q-values static such as 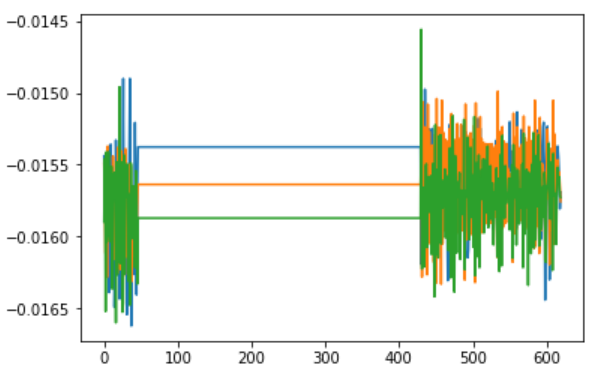 . Note: this is an extract of the end of an episode and the beginnig of a new one, the noisy behaviour at the extreme is due to the model being trained for each step, in the middle the training is off and the agent acts greedily (as I explained above). The problem is that the learned parameters give rise to static q values that do not change while the state does and inevitably make the agent stuck in suboptimal strategy, as they never changes actions, even on longer sequences on the test set. The middle part of the second picture, where trainig is off, should look like the first picture, however, I am unable to get back to that optimal behaviour, even keeping all the parameters as they were.

Any idea on what can be the cause of this anomalous behaviour?

It is likely converging to a far worse local optimum from which it can't recover, so yes I would guess if all else is the same, that is where the issue would be. I would first try to adjust hyperparameters from a static seed for weight initialization. ε and α, are likely good places to start.

If that fails, adjust some architecture params like the number of units or layers in the network as well as the starting seed value.

You seemingly have run into a core problem at the heart of ML research which is reproducibility, which is often predicated by initialization.

Not the answer you're looking for? Browse other questions tagged reinforcement-learning q-learning long-short-term-memory dqn convergence or ask your own question.

4
How can I ensure convergence of DDQN, if the true Q-values for different actions in the same state are very close?
3
DQN stuck at suboptimal policy in Atari Pong task
2
How can certain information about the goal be given to the RL learning algorithm?
1
What is the optimal exploration-exploitation trade-off in Q*bert?
1
Implementing Multiple NNs in one DQN model?