I have created my own RL environment where I have a 2-dimensional matrix as a state space, the rows represent the users that are asking for a service, and 3 columns representing 3 types of users; so if a user U0 is of type 1 is asking for a service, then the first row would be (0, 1, 0) (first column is type 0, second is type 1...).

The state space values are randomly generated each episode.

I also have an action space, representing which resources were allocated to which users. The action space is a 2-dimensional matrix, the rows being the resources that the agent has, and the columns represent the users. So, suppose we have 5 users and 6 resources, if user 1 was allocated resource 2, then the 3rd line would be like this: ('Z': a value zero was chosen, 'O': a value one was chosen) (Z, O, Z, Z, Z)

Now, when the agent chooses the action, for the first resource it picks an action from the full list of possible action, then for the second resource, the action previously chosen is removed from the possible actions, so it chooses from the actions left, and so on and so forth; and that's because each user can be allocated one resource only. The action tuple with all 'Z' can always be chosen.

The problem is, the agent always tends to pick the same actions, and those actions are the tuple with all 'Z' for all the users. I tried to play with the q_values initial values; q_values is a dictionary with 2 keys: 1st key: the state being a tuple representing each possible state from the state space, meaning (0, 0, 0) & (1, 0, 0) & (0, 1, 0) & (0, 0, 1), combined with each action from the possible actions list. I also tried different learning_rate values, different penalties and rewards etc. But it always does the same thing. 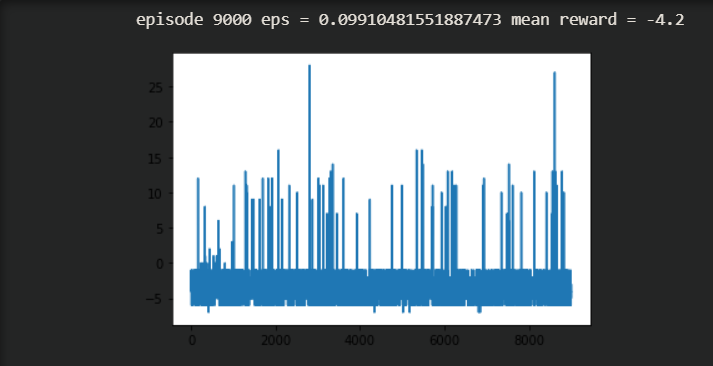 However, from the first paragraph it seems that the states themselves are matrices (one row for each user), so the state space is a set of such matrices.

1
Agent in toy environment only learns to act optimally with small discount factors
1
Can Q-learning working in a multi agent environment where every agent learns a behaviour independently?
5
How to define an action space when an agent can take multiple sub-actions in a step?
1
OpenAI Gym: Multiple actions in one step
1
How to create a Q-Learning agent when we have a matrix as an action space?
1
DQN layers when state space and action space are multi dimensional
2
Do I need to know in advance all possible number of states in Q-Learning?
3
What happens when the agent faces a state that never before encountered?