How can we get a differentiable neural network to count things?

Imagine I have images with apples in them. I want to train a neural network which can count the number of apples in each image.

BUT, I don't want to use a detector, then count the number of bounding boxes. I'm interested in knowing if there's a way to bake this sort of logic into a differentiable neural network.

The simplest variation of this problem might be: I have an input vector $x \in \{0, 1\}^N$ and I want to count the number of 1s in it. I can make a single layer neural network, setting all the weights to 1, bias to 0, and linear activation. And my answer pops out. But how would I train the network to do this from scratch? Sure, I could regress to an output in $[0,1]$ and multiply the result by $N$, then the network is differentiable. But did the model really learn how to count? If so, would this behaviour be generalisable to counting multiple types of objects at once? Would it generalise to inputs where there can be any number of said object (like an image can have many apples in it, despite the size of the image)?

I want to know if there's a model which can learn how to count.

Here's another way I'm thinking about it: I can look at an aerial view of pine trees and say "yeah maybe there are 30 trees", but then I can do the task of looking at and identifying each tree individually, incrementing a counter, and making sure not to revisit that tree. The latter is what I consider truly "counting".

Estimating from an observation is a function, but "really counting" is a process. Feed-forward neural networks can learn arbitrary functions from training examples, but they cannot represent (and therefore cannot learn) processes. They can attempt to estimate the results of completing a process as a function, but that is not the same thing as actually performing the process.

To learn arbitrary processes from examples requires a model with some concept of state and evolution over time in addition to any functions that are required. Recurrent neural networks (RNNs) are suitable models for those kinds of learning problems, but so are other AI learning constructs.

This rabbit hole goes deep, and for any model you could build it is possible to ask:

There are other questions you could ask too, depending on your goals for producing such a model.

It is worth noting that for small quantities and certain patterns, that human "counting" does more closely resemble the estimation process, or perhaps is more akin to an NLP problem. For example, consider how you "count" the pips on a die - although you can use a counting process to confirm what you see, typically you do not do so. Instead, some part of your brain is supplying a very accurate answer quickly and unconsciously: 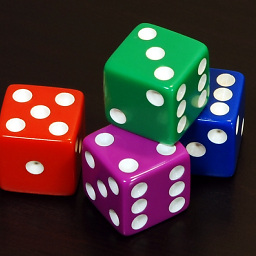 More generally, counting in humans likely consists of multiple related strategies for converting observations into symbolic and/or sensory representations of quantity. Some may be instinct, some are learned conscious behaviours and some appear to be in-between, perhaps originally learned but turned into subconscious skill through repetition.

Ignoring whether or not you are implementing your AI project for counting items in an image wholly within a neural network for now, I think you need the following components:

The last component can vary a lot, and humans will use a range of different strategies for counting depending on the difficulty of the task. For instance, you might use working memory (a limited resource in humans) to track a few key points in an image to help segment an image into smaller sections as you work across it. Or you might make visual marks on an image to track each object that had already been counted. For a human, counting strategies can be mixed and matched, and switched between sometimes even during the same counting task.

All of these components could be represented in learnable parts of an AI process, but they do not have to be. When you suggest in your question that

I don't want to use a detector, then count the number of bounding boxes.

then you are most likely saying that you don't want to use a fixed hard-coded strategy. You want to somehow create a neural network that can discover at least one strategy for processing the input.

The trouble you will face is that giving a large RNN model (e.g. LSTM) a dataset of examples with input images and output correct counts will likely be too much of a challenge. Discovery of a robust object counting system from scratch will be too hard.

There are a few things that may help you construct something that "really" learns to count. Here are a couple of ideas:

Not the answer you're looking for? Browse other questions tagged neural-networks architecture generalization or ask your own question.

10
How to transform inputs and extract useful outputs in a Neural Network?
13
Input/output encoding for a neural network to learn a grid-based game
3
What type of neural network would be most feasible for playing a realtime game?
10
Using neural network to recognise patterns in matrices
3
How to build my own dataset and model for an LSTM neural network
1
Using an 'operation ID' as a neural network input
2
Training a neural network to output the conditional probability of an event when the training data output is only binary
2
Count number of objects in image using CNN