Are any AI systems available, or in development, for finding and analysing fallacious inference in natural language text?

Poor reasoning, and ignorance in general, is the source of a lot of suffering and evil. Covertly erroneous logic is often used in manipulation. And much of this broken thought is being used directly in the training of AI.

There has been talk of, and development in, fact-checking, such as for language transformers. But what about reasoning?

The function in mind is specifically being able to process a potentially large text body, analysing all logic and implied relations for fallacy and other misleading reasoning. Perhaps shades of colour could indicate level of error. A bonus would be output listing and explaining the mistakes, maybe like compiler errors -- "fallacy x between premise y and conclusion z".

Are any AI systems available, or in development, for finding and analysing fallacious inference in natural language text?

The project is about creating a system capable of debating with human on random topics by scraping the internet to get ground knowledge (mainly scientific papers, not random gibberish of course). The system is pretty massive, it include speech synthesis and lot of other components, what's interesting for you are the parts I highlighted in red, especially those on the left that contribute to generate the counter arguments to the human opponent (rebuttal construction).

I won't go into the details cause all those three topics constitute entire branches of Natural Language Processing. But you can easily see how combined together they try to accomplish a rough version of deductive reasoning:

Assuming that we managed to extract all this information from a text (big time, unfortunately not easy at all) then we can build reasoning out of it. For example:

Putting everything together, since we have a negative claim followed by a positive evidence toward the same fact, we just found out that the document contains a contradiction. 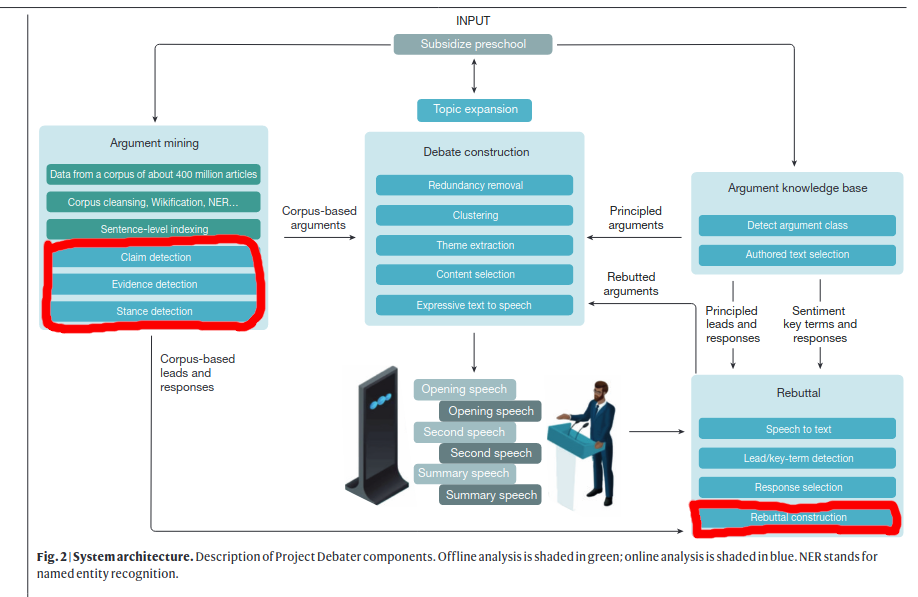 Not the answer you're looking for? Browse other questions tagged natural-language-processing reference-request .

1
Are there examples of AI systems that use grammatical rules in order to recognize commands in natural language?
8
What are the current big challenges in natural language processing and understanding?
0
Why is my loss (binary cross entropy) converging on ~0.6? (Task: Natural Language Inference)
1
Appropriate metric and approach for natural language generation for small sentences
0
Are there any good alternatives to an LSTM language model for text generation?