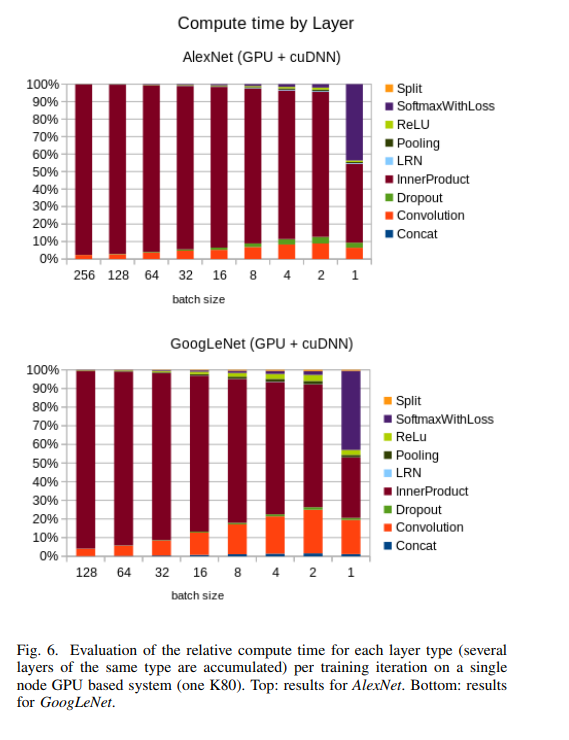 Hello, I would like to know whether this picture from the paper: Distributed Training of Deep Neural Networks: Theoretical and Practical Limits of Parallel Scalability valid?

2) Is assessing GLOPs/time a good way of estimating performance of different types of layers in a neural network on any hardware? (Conv, FC etc.)

3) Does anyone know where I can find GFLOPs vs compute time for different types of layers across GPUs/CPUs? (I know DeepBench, any other suggestions would be great too)

The graph seems to show the relative compute time of each component of the learning process, independent of the layer, using the typical meaning of layer in the context of artificial networks.

Most of the theoretical and practical limits of parallel processing are heavily biased by seventy years of sequential processing as the foundation of computer science study and practice. If an understanding of parallel processing is desired, the von Neumann architecture is not the place to look. At the time of that development, computers could either be made of wood, steel, vacuum tubes, or relays. Developing a computer with 65536 parallel data paths was unrealistic to the extreme. The invention of algorithms was a workaround to funnel all processing through a single CPU. We've been backing out of that mind set for the last thirty years, beginning with FPUs, GPUs, multiple buses, computer clusters, and multiple cores. More parallelism in VLSI form is coming, and soon.

The demonstration of parallel processing comes, as many things do, from biology. Look at farming and grain growth under the sun. Look at visual circuitry coming from the eyes of thousands of species. Consider the orbits of millions of planets and their satellites. The artificial parallelism to examine is the transportation systems and the Internet. Parallel processing is efficient when the process was designed as a parallel process rather than trying to make parallel that which was designed as serial. For instance, the human ear does the physical equivalent of a real time windowing FFT without performing a single multiplication operation.

The bottleneck of the floating point multiplication of an attenuation matrix with a vector (parameterizing the mix of signals from one layer to the next) is a key to why NVidia has done well with re-purposing rendering hardware for artificial network training. It is also one of the many reasons this question is interesting: If digital values are mere estimates, why not return to analog for AI?.

When surfing for GFLOPs vs compute time for different types of layers across GPUs and CPUs, using the term 'operation' instead of 'layer' in the search terms may help. Even though elementary operations are lower level than that of the comparison desired, the term layer is delegated strongly to the higher level meaning in the machine learning literature. Reliable data in this space is thin because much of the speed optimization has already been researched and developed, so whatever the visualization shows is useless unless you work on VLSI development at Intel, Samsung, NVidia, Qualcom, TI, or one of the other silicon giants.

Not the answer you're looking for? Browse other questions tagged neural-networks convolutional-neural-networks ai-design algorithm performance or ask your own question.

23
If digital values are mere estimates, why not return to analog for AI?