I came across a comment recently "reads like sentences strung together with no logic." But is this even possible?

Sentences can be strung together randomly if the selection process is random. (Random sentences in a random sequence.) Stochasticity does not seem logical—it's a probability distribution, not based on sequence or causality.

That stochastic process is part of an algorithm, which is a set of instructions that must be valid for the program to compute.

So which is it?

Some definitions of computational logic:

The arrangement of circuit elements (as in a computer) needed for computation also: the circuits themselves Merriam Websters A system or set of principles underlying the arrangements of elements in a computer or electronic device so as to perform a specified task. Logical operations collectively. Google Dictionary The system or principles underlying the representation of logical operations. Logical operations collectively, as performed by electronic or other devices.
Oxford English Dictionary

Some definitions of randomness

Being or relating to a set or to an element of a set each of whose elements has equal probability of occurrence. Lacking a definite plan, purpose, or pattern. Merriam Websters. Made, done, happening, or chosen without method or conscious decision. Google Dictionary Having no definite aim or purpose; not sent or guided in a particular direction; made, done, occurring, etc., without method. Seeming to be without purpose or direct relationship to a stimulus. Oxford English Dictionary

I think the answer here lies in that the dictionary definition of randomness you have is not the one used in statistics, ML, or mathematics. We define randomness to mean there exists a distribution with generally greater than 0 uncertainty.

Depending on who you talk to, we live in a random universe (the way we define quantum mechanics depends on a wave function (essentially a probability distribution)

So why if a sequence is drawn from a distribution is it illogical? First, even as humans we can make a strong argument that what we say is random. I mean we speak to convey some form of message or context, but there exists multiple ways to deliver this, but we choose a single one. Our brains inherently model $p(\vec w|c)$ where $\vec w$ is the sequence and $c$ is our context or message we want to convey.

Takeaway: Generating a sequence in an ergodic or uniform manner would be illogical, but that is not what is being modeled or done in practice. Normally its drawn from some complex distribution.

Sidenote: My above claim could make it seem that being uniformly random implicates something illogical, and I want to emphasize that is not the case. It is domain to domain, sometimes that is the most logical solution, just in the case of sentence generation it normally isnt. I would define a logical algorithm as one that given the information at hand acts in a sensible manner towards achieving some goal, and so if something purely random does that, I don't see the problem.

I might misunderstand your question, but there seem to be different levels of logic at play here.

While you can easily generate a sequence of random sentences, they will not mean anything; there won't be any logic behind selecting a particular sentence to follow on from another one. So this is linguistic logic rather than processing logic. Note that where the linguistic logic is makes it a bit vague: I can read a randomly selected sequence of sentences and ascribe meaning to it by building a mental model that treats it as a logically constructed text. This principle is what made ELIZA so successful: even though the program's answers were based on simple pattern matching rules with no understanding, many users assumed there was logic/meaning behind it and interpreted it as such, papering over the cracks in the conversation.

In summary: there is logic involved in random sentence combining, but it is the low-level computing logic, not the higher-level linguistic interpretative logic, which is generally absent from randomly generated data.

Strategy is essentially a plan of action utilized to achieve a goal.

This seems paradoxical, in that the random strategy is to have no strategy (random choices.)

Previous answers are very well written. I just wanted to supplement the thread by giving a simple example. The example shows how a logical function can be computed without errors using noisy components. 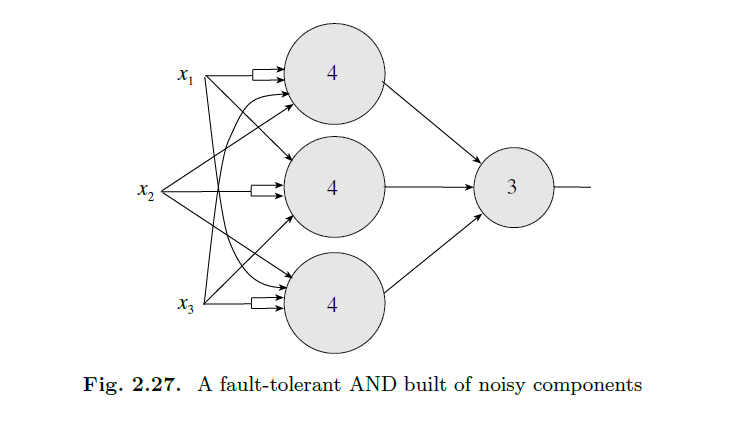 Let me add an example from machine learning that shows that resorting to randomness is the optimal way, sometimes.

When working on the whole data is not tractable (computation cost, data does not fit in memory), working on random samples can be an optimal way to train a machine learning algorithm. One of the most used optimization technique in those cases is the Stochastic Gradient Descent.

It is an iterative procedure that computes the estimates of the true gradient of the loss function that needs to be minimized, over a randomly selected data point from the whole data. After getting the gradient estimate, the weights are updated, all this done by the well known back-propagation algorithm. This procedure is repeated many times until a stopping criterion.

This, computability of randomness in conjunction to logic, is unfortunately/fortunately a very technical topic.

" ... That stochastic process is part of an algorithm, which is a set of instructions that must be valid for the program to compute.

This answer is about: randomness and chaos; and how they relate to logic and computability.

"What is randomness and where does it come from? This is one scary place to venture in. We take for granted the randomness in our reality. We compensate for that randomness with probability theory. However, is randomness even real or is it just a figment of our lack of intelligence? That is, does what we describe as randomness just a substitute for our uncertainty about reality? Is randomness just a manifestation of something else?" — "Medium." Medium, < medium.com/intuitionmachine/there-is-no-randomness-only-chaos-and-complexity-c92f6 >.

"Many natural intensional properties in artificial and natural languages are hard to compute. We show that randomized algorithms are often necessary to have good estimators of natural properties and to verify some specific relations. We concentrate on the reliability of queries to show the advantage of randomized algorithms in uncertain cognitive worlds." — de Rougemont, Michel. "Logic, randomness and cognition." Logic, Thought and Action. Springer, Dordrecht, 2005. 497-506.

Unfortunately, quantum chaos in relation to randomness, is a profoundly technical topic. I have managed to track down sources that relatively aren't overly technical.

As a starting point, this Wikipedia article is worth reading:--

You can continue and read this particular Medium post:--

Other References for the Layperson:--

Some broader implications of chaos [Link to Stanford Encyclopedia of Philosophy].

When I think of randomness, I'm inclined to think in cosmological terms. Is randomness is a structural property of the universe? Is anything in the universe truly random?

"We propose a link between logical independence and quantum physics. We demonstrate that quantum systems in the eigenstates of Pauli group operators are capable of encoding mathematical axioms and show that Pauli group quantum measurements are capable of revealing whether or not a given proposition is logically dependent on the axiomatic system. Whenever a mathematical proposition is logically independent of the axioms encoded in the measured state, the measurement associated with the proposition gives random outcomes. This allows for an experimental test of logical independence. Conversely, it also allows for an explanation of the probabilities of random outcomes observed in Pauli group measurements from logical independence without invoking quantum theory. The axiomatic systems we study can be completed and are therefore not subject to Gödel's incompleteness theorem." Paterek, Tomasz, et al. "Logical independence and quantum randomness." — New Journal of Physics 12.1 (2010): 013019.

4
Is randomness necessary for AI?