How does heuristic work with multiple agents? 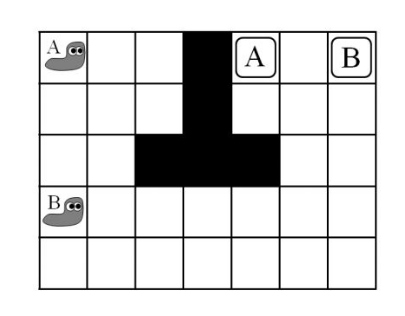 My question is, if we have two worms, like in the picture, the optimal cost would be 9 + optimal cost for Worm A?

Also, strictly for this problem with 2 agents, if we use Manhattan distance as a heuristic for one agent, would it be admissible if we take the average of Worm A and B heuristics for a problem with two agents?

Another question, I know for a fact that sum of two admissible heuristics won't be admissible for one agent but would it be for the problem with two agents?

These two worms are dependent of each other. How? If one worm moves from position X to Y, the position X is marked as a wall and is not an available field to move in. So if one worm has been in a specific position, that position is no more free for moving in.

heuristics multi-agent-systems a-star
Share
Improve this question
asked May 7 '20 at 12:30

Browse other questions tagged heuristics multi-agent-systems a-star or ask your own question.

3
How do I find whether this heuristic is or not admissible and consistent?
2
Understanding the proof that A* search is optimal
2
In the graph search version of A*, can I stop the search the first time I encounter the goal node?
1
Which heuristics guarantee the optimality of A*?
1
What is the difference between the heuristic function and the evaluation function in A*?
2
Determining minimal state representation for maze game