How can abstract graphs be recognized by neural nets?

Recognition of optical patterns (as pixel maps) by neural networks is standard. But optical patterns may be only slightly distorted or noisy, and may not be arbitrarily scrambled – e.g. by permutations of rows and columns of the pixel map – without losing the possibility to recognize them. This in turn is the normal case for abstract graphs in their standard representation as adjacency matrices: only under some permutations of nodes a possible pattern is visible. In general, for almost all random graphs under no permutation a pattern is visible, but for all graphs under almost all permutations a pattern is invisible.

How can this be handled in the context of either unsupervised or supervised learning? Assume you have a huge set of graphs with 100 nodes and 1,000 edges, given as 100$\times$100 adjacency matrices under arbitrary permutations, but with only two isomorphism classes. How could a neural network find this out and learn from the samples? Is this possibly common knowledge: that it can not? Or are there any tricks?

(One trick might be to draw the graph force-directed and hope that it settles in a recognizable configuration. But this to be detectable would require a much larger pixel map than 100$\times$100. But why not?)

The OP's (i.e. my) assumption is wrong. It is not true that for almost all random graphs under no permutation a pattern is visible, as can be seen in Tiago P. Peixoto's paper Bayesian stochastic blockmodeling, p. 4: 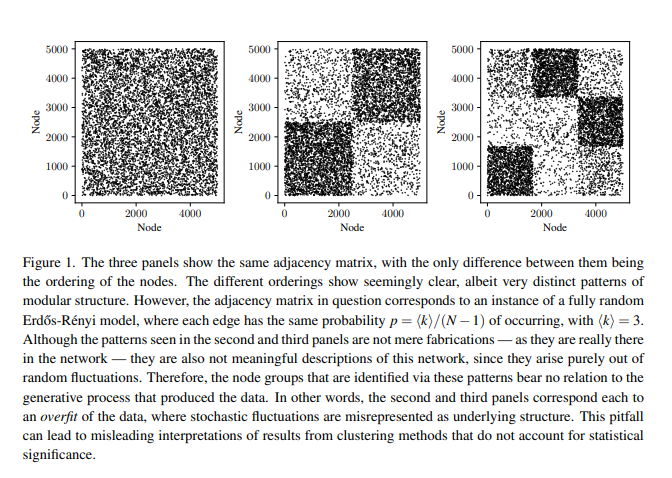 The opposite seems to be correct: For almost all random graphs there are permutations such that patterns are visible.

Not the answer you're looking for? Browse other questions tagged neural-networks machine-learning pattern-recognition geometric-deep-learning graph-theory .

4
Are there neural networks that accept graphs or trees as inputs?
2
Is there a neural network method for time-varying directed graphs?
2
How can I teach a computer to play N64 games using Neural Nets?
1
How does a GCN handle new input graphs?
1
Can I extend Graph Convolutional Networks to graphs with weighted edges?
1
How do graph neural networks adapt to different number of nodes and connections of different graphs?