I have checked out many methods and papers, like YOLO, SSD, etc., with good results in detecting a rectangular box around an object, However, I could not find any paper that shows a method that learns a rotated bounding box.

Here's a diagram that illustrates the problem. 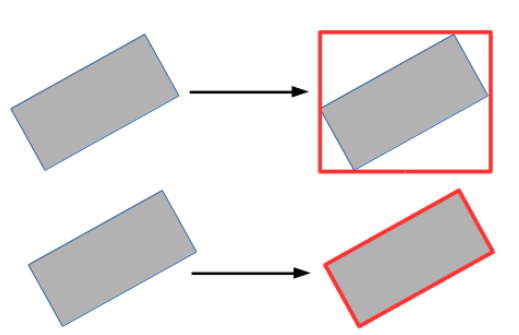 For example, for this object (see this), its bounding box should be of the same shape (the rotated rectangle is shown in the 2nd right image), but the prediction result for the YOLO will be Ist right.

Is there any research paper that tackles this problem?

It should not be much more difficult to predict a rotated rectangle compared to a bounding box.

A rotated rectangle can be parameterized with 5 floats: $x_c$, $y_c$, width, height, angle.

However, to avoid the wrap-around issue with predicting the angle with one value (0° is same as 360°), it should be better to predict sine and cosine instead.

Here are 2 links I found about this topic:

Not the answer you're looking for? Browse other questions tagged convolutional-neural-networks computer-vision object-detection yolo .

2
Understanding a paragraph about object detection with two objects
5
In YOLO, when is $\mathbb{1}_{i j}^{\mathrm{obj}} = 1$, and what are the ground-truth labels for $x_i$ and $y_i$?
1
Can YOLO detect large objects?
2
How can I detect thin objects (like pens and pencils) without a bounding box but only 2 endpoints and the orientation?
6
What's the role of bounding boxes in object detection?
0
Pseudocode for CNN with Bounding Box and Classifier
3
Can bounding boxes further improve the performance of a CNN classifier?