What other kind of AIs exist apart from goal-driven?

Goal-driven AIs is the only kind of AI I am aware of. However, Marcus Hutter claims the following

Most, if not all known facets of intelligence can be formulated as goal driven or, more generally, as maximizing some utility function. It is, therefore, sufficient to study goal driven AI.

Whether all AI are goal-driven depends on how far you're willing to extend the definition of 'goal'.

There will always be some sort of goal, but it may in certain cases become so nebulous it's really a stretch to continue calling it a goal. For example, unsupervised learning (as suggested by Aiden Grossman) - the goal you set is "learn", with very little qualifiers. The underlying AI may develop in surprising and unexpected ways; it may even modify own goals.

Similarly, another "aimless" AI type is a simulator of biological intelligence - say, replicating neural connections of an insect in software, making it run and observing the behaviors. The AI itself is not given a specific goal - it's a tool/subject of study, not something directly producing results. Still, the goals are exactly the same as goals of the original insect: feed, multiply, stay safe; unattainable due to hardware limitations but still pursued.

Therefore, whether all AIs are goal-driven is arguable. The only AI that is not actually driven by any goal whatsoever is one that's switched off. But whether you consider all the possible nebulous, abstract or accidental goals that drive the AI to call it actually goal-driven, that's up to debate.

I suppose, the context was as follows: suppose you have AI for which goals cannot be described by a function. It doesn't mean it has no goals, but that formulation of the goals cannot be functionally dependent on known reality model parameters. In this interpretation text which you cited has clear meaning: author doesn't want to discuss such kinds of object, which is reasonable.

Simple Reflex agents are based on condition action rules, kinda like If-then rule based agents.

Model based agents are whose which have a model of the world in it, I mean how the world evolves and what my action will do They are in two variants, Model based reflex agent and model based goal directed agent.

Former one percepts the environment, infer from that how the world evolves and figure out what their action will do then that have some conditon base rules which then lead to action, 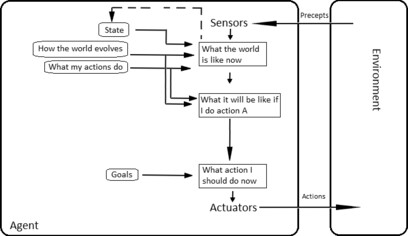 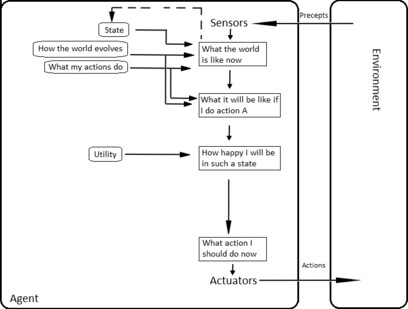 Utility agents are reinforcement based agent they act in environment to maximize their utility, and have some element to check what the happiness measure or "Performance measure" is, the defintion of rational Agent is based on this, which is a rational agent will always act to maximize their average utility. 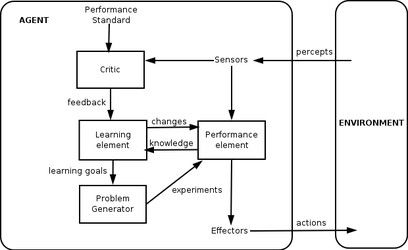 Learning agent are which contain some kinda critics, some learning element and then problem generator, an isomorphism might be drawn from to Neural networks, which has their critics as Cost function, learning element as Wieght tuning. I have been saying "kinda" because they just seems to be metaphor to me.

I dont know why Marcus hutler described goals agents as Utility based agents, probably he had some kinda hybrid of two.

Case One — Goals not Goal

When systems are developed, they are based on requirements. The goals of the system is closely coupled to the goals of the development. This is the first example. Few systems and few development efforts to construct them are goal driven. They are rather systems and processes that tend toward a set of goals. Rarely is there a single loss function.

These systems are goals driven, using the plural, not goal driven.

Another type of AI approach that is not technically goal driven are genetic algorithms. They replicate and some of the replicants are eliminated, but the entities themselves have no goal. The elimination criteria is not technically a goal. It is the opposite of one. The appearance of replicants that are not eliminated after many rounds of replication and concurrent narrowing of criteria may achieve some goal of the person running the algorithm, but the algorithm itself has no representation of a goal but rather its opposite, the final criteria of elimination in the last round.

Many AI experiments to discover the nature of intelligence and ways to simulate aspects of intelligence have the external goal defined by the researcher, but the system used in the experiment, the AI apparatus, is not driven by a goal. It runs goal-less.

Whether toys for adults or kids, toys may arise with some goal in mind, to amuse in some way, but the AI within them has no goal. There is no loss function to minimize or reinforcement or wellness signal to maximize. It's behavior may be less amusing if it were goal driven. What makes it amusing is its ability to produce patterns associated with intelligence, but to no particular purpose. In some ways, much human conversation and creative art is like this. Too much purpose, and the level of amusement decreases.

Humans in postmodern society, the ones that are truly relativists and have rejected modernism, are not particularly goal driven. They tend to wander around and do things that are intelligent, however they may act goal directed and then destroy the product of the transient goal. Building sand castles on the beach is an example. Although this may not be the focus of current AI research, since there is so much hope placed in AI to do things for us, such does not exclude the possibility of future robots that build something and then destroy it to build something else, without some practical objective.

Not the answer you're looking for? Browse other questions tagged agi definitions terminology .

31
How is a deep neural network different from other neural networks?
9
What kind of body (if any) does intelligence require?
9
What kind of education is required for researchers in AI?
10
What kind of simulated environment is complex enough to develop a general AI?
1
What kind of search method is A*?
0
What is the goal of a constraint solver?
3
What are examples of thought experiments against or in favour of strong AI, apart from the Chinese room argument?
2
What is the name of an AI whose primary goal is to create a better AI?
0
Are there other mathematical frameworks of artificial general intelligence apart from AIXI?